Popular Indian TV actor Shweta Tiwari's estranged husband Abhinav Kohli filed a petition against the actor in High Court over the custody of their four-year-old son Reyansh. Sharing a snippet of an article, published in Dainik Bhaskar, Abhinav confirmed the news the same on Tuesday via his social media handle. As per the snippet, Abhinav filed the petition in December 2020.

The snippet quoted Abhinav Kohli's lawyer Tripti, who said that last year when Shweta had contracted Coronavirus, she had sent Reyansh to stay with Abhinav. And, during Reyansh's stay, Abhinav took care of his son. However, after recovering from the virus, Shweta took away Reyansh. And since then, she hasn’t been letting him meet Abhinav, added the lawyer. 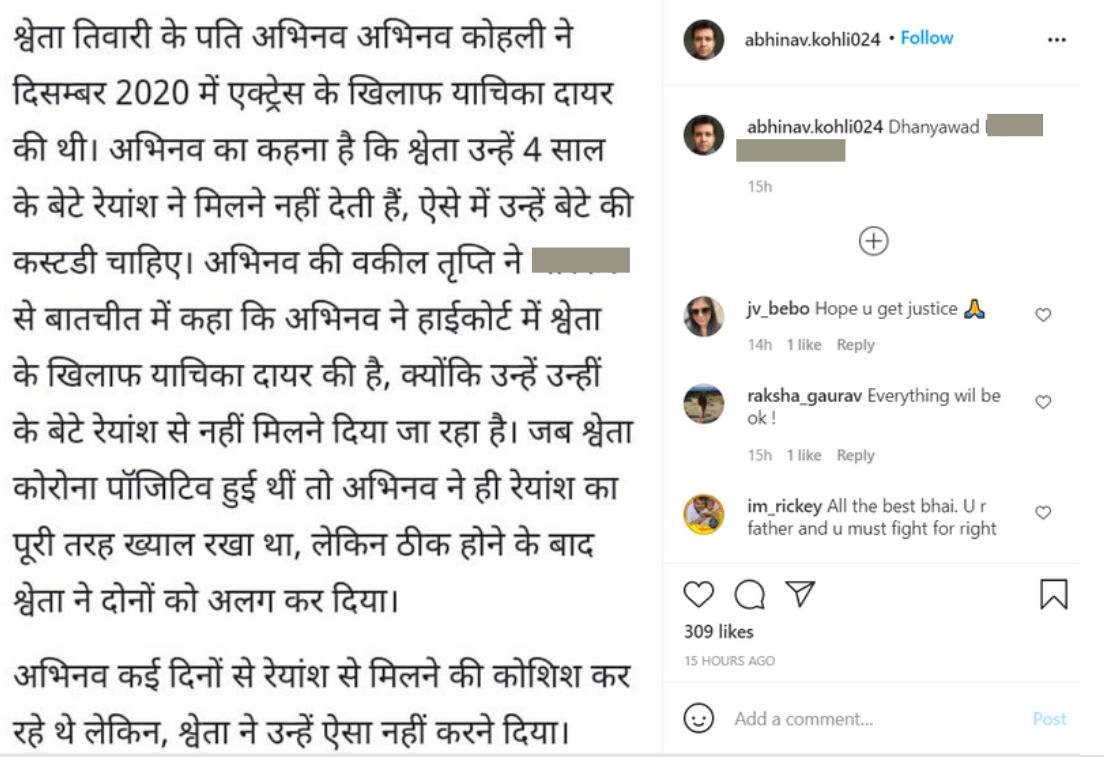 In addition to this, Abhinav’s lawyer Tripti Shetty had said that the High Court issued a notice in December 2020 itself, and the matter was listed on January 5. Shetty explained that Shweta was present on that day, however, she asked for some time to get a lawyer. As per Tripti's conversation, they requested Shweta to let Reyansh meet Abhinav, even if it was through a video call. She also mentioned that as per the court's order, Abhinav is permitted to interact with Reyansh every evening from 6 to 6.30 pm. In the same report, Kohli concluded by saying that he hasn’t met his son since November 12, 2020.

In November 2020, Kohli had shared a bunch of videos, featuring Shweta and his son Reyansh. In one such video, Shweta was seen blocking Abhinav from entry into the house. In the caption of his video-post, Kohli had written that Tiwari is not permitting him to meet their son. His brief caption read, "My goodness was misused".