Sidharth Shukla and Rashami Desai's throwback video of a lovemaking scene has been resurfacing online. Check out how their fans are reacting to the same.

In this throwback video, the duo is seen sharing some intimate moments with each other. Later in the video, they are seen playing a pillow fight as Rashami is seen beating Sidharth with a pillow. At the end of the video, they are seen hugging each other and sharing a beautiful moment with each other. The video is a part of their show Dil Se Dil Tak, which the duo did together. SidRa fans went gaga over the video as they widely appreciated the duo’s chemistry and also demanded that they should feature in a new project together. 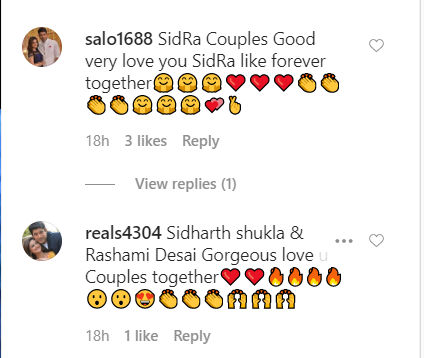 On the occasion of Mother's Day, both Sidharth Shukla and Rashami Desai shared some adorable pictures with their mothers. The Bigg Boss 13 winner Sidharth Shukla shared a cute picture with his mother, Rita Shukla wherein the mother-son duo is seen gazing into each other's eyes as they brushed their mugs together. He captioned the post as, 'Grounded Literally!!! Anyways Happy Mother’s Day ðŸ˜Š'.  Rashami Desai also shared a streak of adorable and quirky pictures with her mother and other family members and said, "Every day is Mother's Day".

Also Read| Rashami Desai admits to watching videos of Sidharth Shukla, says 'I am in touch with him'

PEOPLE HAVE PLEDGED SO FAR
LATEST NEWS
View all
15 hours ago
Actor Mohena Kumari & father-in-law, along with staff members test COVID-19 positive
11 hours ago
KBC junior winner Ravi Mohan Saini becomes an IPS officer; talks about his journey
15 hours ago
Nia Sharma or Janhvi Kapoor: Who rocked quirky holographic outfit in style?
16 hours ago
Can Jen be perfect 'Maya' in Hollywood remake of 'Sarabhai vs Sarabhai'? Here's the cast
15 hours ago
Vikas Guppta posts a note & asks people 'not to comment' or 'like' the post; Here's why