Sidharth Shukla was seen romancing with Shehnaaz Gill in a 'behind the scenes' video shared by the latter of the song Bhula Dunga, leaving fans swooning.

Bigg Boss 13 might have ended a long time ago, but it seems that the fans of Sidharth Shukla and Shehnaaz Gill are still obsessed with the wonderful couple. The two have been treating their fans with some videos and tweets with each other and fans are loving it. They featured in a video of Bhula Dunga song together, and their chemistry was widely appreciated by the fans. Shehnaaz shared a behind-the-scenes video of the song on her Instagram recently.

What did Sidharth say to Shehnaaz?

Shehnaaz Gill shared a video of the behind-the-scenes shenanigans of the song Bhula Dunga. In the video, Sidharth and Shehnaaz are seen shooting for a moment in the video where the two are sitting in front of a bathtub on the floor. While Sidharth is sitting behind, Shehnaaz can be seen leaning on him. The two sat and drank some wine in the video.

The video of Bhula Dunga song's BTS then shows how Sidharth whispers something in Shehnaaz’s ears. Shehnaaz responds to it by playfully nudging him and they lovingly smile at each other. This could be a part of the actions that the two had to do during the shooting of the song. This little gesture was soon picked up by fans and they all were very curious as what Sidharth whispered in Shehnaaz’s ear to make her react as she did.

A fan pointed out how Sidharth was enjoying the shoot with Shehnaaz so much that he was not following any directions given by the director. The director asked Sidharth to kiss Shehnaaz on her head but he seems lost. The fan also pointed out how Shehnaaz nudged him about it but he did not do so. 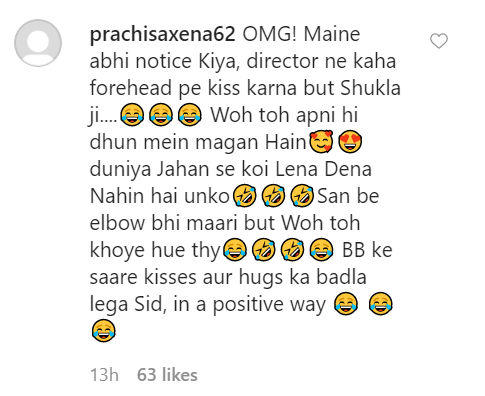 Shehnaaz and Sidharth had wonderful chemistry while they were a part of the Bigg Boss 13 house. The two became fast friends and Shehnaaz reportedly had romantic feelings for Sidharth. Sidharth also admitted on having special feelings for Gill. After the two came out of the house, Sidharth being the winner, their fans have taken upon themselves to bring the two contestants together. They have been sharing their feelings about how the two are good for each other on social media portals.

Sidharth Shukla and Shehnaaz Gill, or SidNaaz, featured in the video of the Bhula Dunga song by Darshan Raval. The song is written by Gurpreet Saini & Gautam Sharma. It is composed by Darshan Raval himself.

ALSO READ | Sidharth Shukla's Advice To His Married Friends Is Hilarious, Check It Out

PEOPLE HAVE PLEDGED SO FAR
LATEST NEWS
View all
2 hours ago
Jennifer Winget to not celebrate her birthday this year, says its 'trivial & unimportant'
1 hour ago
'Ramayana' star Dipika Chikhlia Topiwala aka Sita reveals her real-life Ram; See pic here
1 hour ago
Asha Negi opens up about her early days as an actor; Read details here