Unseen Pic Of The Day: Jasmin Bhasin's 'then' & 'now' Pic Will Leave You Shell-shocked

Bigg Boss 14's Jasmin Bhasin is among the well-known actors in the television industry. A 'then' and now' pic of the actor is making the rounds on the internet.

Dil Se Dil Tak actor Jasmin Bhasin is among the well-known actors in the television industry. The actor also goes on to enjoy a massive fan following on her social media handles. Talking about the actor’s social media handle and fan following, fans recently came across a ‘then’ and ‘now’ photo collage of Jasmin Bhasin which is truly unmissable. Seeing the post, fans were quick enough to leave some adorable comments on the post.

In the picture shared by an Instagram handle, the actor looks completely unrecognisable in the ‘then’ and ‘now’ pic. In the ‘then’ picture, the actor can be seen giving a poker face look. She can be seen sporting a black and white formal outfit and opted for a middle parting hairdo, well-done brows and minimal makeup. The actor looks very young in the picture. In the ‘now’ picture, the actor can be seen striking a stunning pose looking all glamorous. She can be seen donning a black outfit with a plunging neckline and completed the look with a white shrug. The actor also opted for a sleek and wavy hairdo, well-done brows, bronze highlighter and bold lips. The fan page also asked fans to choose between ‘then’ and 'now'.

The Instagram handle that shared the picture also went on to pen a sweet and simple caption. The caption read as, “Jasmin’s transformation is just amazing”. Take a look at Jasmin Bhasin's unseen photo below.

Fans went all out to comment all the nice things on the post when they saw Jasmin Bhasin's photo. The post that the fan page shared went on to get a lot of likes and comments from netizens. Some of the users commented on the actor's looks and personality. Others went on to comment on which pic they liked the most. One of the users wrote, “This is such a beautiful picture”. Another user added, “then with a love-struck emoji”. Take a look at a few comments below. 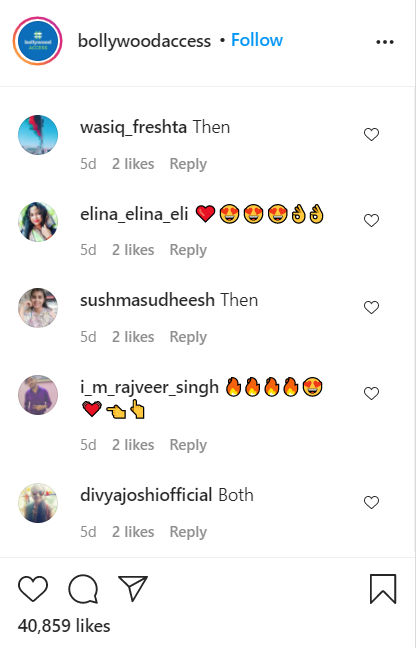 Jasmin Bhasin's much-acclaimed show Naagin: Bhagya Ka Zehreela Khel was one of her most recent television serials. The actor was also seen on Colors TV's Fear Factor: Khatron Ke Khiladi - Made in India. She is currently being seen in the reality TV show, Bigg Boss 14.

Also read | Not Conscious About My Image Getting Hampered On ‘Bigg Boss’: Jasmin Bhasin