Priyanka Chopra Jonas was recently seen in the Netflix film, The White Tiger. Rotten Tomatoes has rated the film 92% and Priyanka took to her Instagram stories.

Priyanka Chopra Jonas was recently seen in the Netflix film, The White Tiger where she played the role of Pinky Madam. The film released on January 22 and also featured Adarsh Gourav, Rajkummar Rao, Mahesh Manjrekar, Vijay Maurya among others in key roles. Rotten Tomatoes has rated the film 92% and Priyanka took to her Instagram stories to share the same. Have a look below.

Priyanka Chopra shared a screenshot on her Instagram story that had Rotten Tomatoes scores. It displayed Netflix’s 2021 movies ranked from best to worst, according to Rotten Tomatoes scores. The White Tiger was first on the list which meant it was the best. The screenshot also had a snip of a still from the movie that featured Priyanka Chopra, Adarsh Gourav and Rajkummar Rao. Rajkummar Rao took to Instagram to repost Priyanka’s story. Full of excitement, the actor captioned his story by writing, “No.1.” 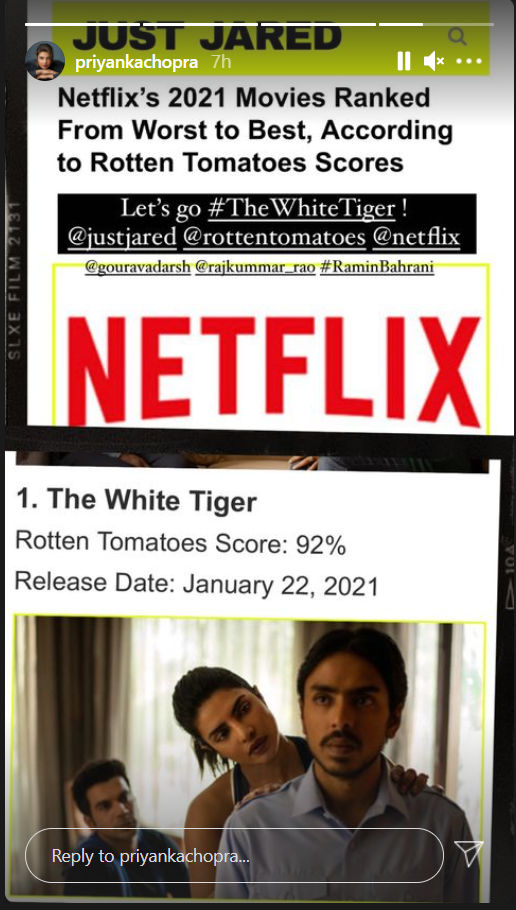 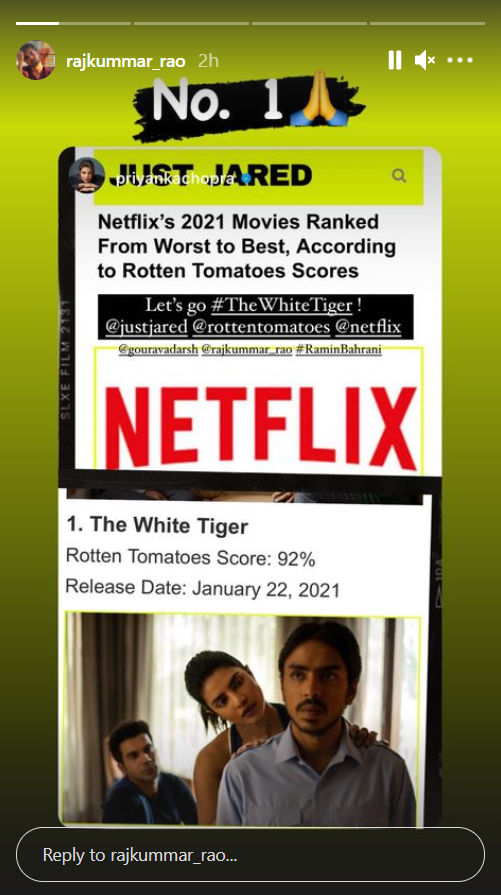 The White Tiger has been creating a buzz on the internet for its amazing success worldwide with spectacular reviews from the audiences. On February 6, Priyanka Chopra Jonas announced through her social media handle that the film has reached at number one position on the 'top 10 film list in 64 countries'.  Sharing a poster of the film that featured Priyanka Chopra Jonas and Adarsh Gourav, she wrote that it was so emotional for her to see the discovery and acceptance of the brilliant incredible story. The White Tiger being embraced by audiences all over the world was awe-inspiring for her. She congratulated and thanked Aravind, Ramin, Adarsh, Raj, Mukul, Ava and everyone involved. She also thanked Netflix for giving their little movie wings.

Also read: Is 'The White Tiger' A True Story? Know Details About The Mega Hit Movie

More about The White Tiger -

The White Tiger is an adaptation of 2008's novel of the same name by Aravind Adiga. The film narrates a story through the lens of Balram Halwai (Adarsh Gourav), a member of the servant class navigating his way to the top as he faces the pressures of being born into a low caste family. It pays heed to several socio-economic issues like corruption, the greed of the riches, the crooked caste system that is still prevalent in the country today.