'Squid Game' Costume: What The Netflix Show's Mask & Jumpsuit Mean And Where To Buy Them?

Squid Game, much like Netflix show Money Heist had an appealing set of costumes designed for its characters, hot pink jumpsuits with black face masks. 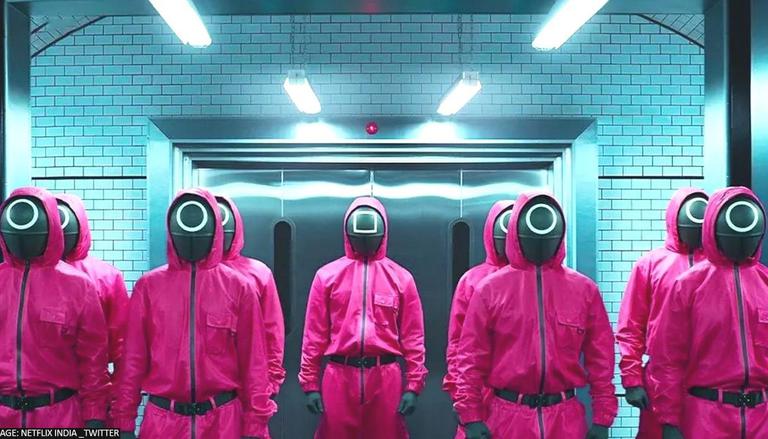 
Korean thriller drama Squid Game has taken streaming platform Netflix by storm. The intriguing series about a murderous tournament of children's games is on its way to becoming Netflix’s biggest show to date. While writer/director Hwang Dong-hyuk is yet to speak on the return of the show for a second season, the viewers have been left enthralled by the show’s concept and storyline.

Apart from the show’s grand colour scheme and thrilling story, what stays with the viewers is the costumes shown in the show. The show, much like Netflix show Money Heist had an appealing set of costumes designed for its characters. Although similar and common, the Squid Game costume is sure to become a thing coming Halloween 2021.

At this point, the Squid Game costume is almost the same as saying Squid Game jumpsuit. The uniform of guards in the show is the most common yet most appealing thing. The costume is straightforward with hot pink jumpsuits, black belts, and plastic fencer-like masks. Moreover, the masks will have one of three shapes - triangle, circle, or square painted in white across the eyes. The jumpsuit unlike the heroic red jumpsuit from Money Heist has a negative shade to it as the ones who wear it in the show are murderous guards and not the lead characters.

What does the Squid Game costume mean?

The guard costumes play on the viewer’s emotions as the hot pink colour remains undecided. The costume’s colour is red for a few fans who believe it shows the thrilling nature of the show while it is pink for others, who believe the colour signifies the provocative nature of the ruthless characters wearing it. The colour changes anywhere from bloody to insecure to play with the viewer's mind. Meanwhile, the black zippers and belts simply reiterate the guards’ authoritative nature while the mask takes away any character from them making the guards simple clones of one another.

READ | 'Squid Game': Korean Man gets bombarded with calls after his no. appears on Netflix show

The costume, as intriguing as it is, will be a huge hit in Halloween 2021. While, neither the show nor Netflix has released official merchandise for the show, the costume can be found on multiple websites now. The jumpsuits and masks could also be bought from Amazon. The Squid Game mask has already become a fast seller on the shopping website.

The series stars Lee Jung-jae, Park Hae-soo, O Yeong-su, Wi Ha-joon, Jung Ho-yeon, Heo Sung-tae, Anupam Tripathi, and Kim Joo-ryoung in the lead roles. As per Variety, Squid Game became the first K-drama to rate as Netflix’s top show in the U.S. Netflix co-CEO Ted Sarandos at Vox Media's Code Conference, earlier this week said, "There's a show on Netflix right now that is the No. 1 in the world, like everywhere in the world. It's called Squid Game. Squid Game will definitely be our biggest non-English language show in the world, for sure."