'The Haunting of Bly Manor' actor, Rahul Kohli, was seen grooving to 'My Name is Lakhan' while munching pakoras on Twitter and the internet loves it, went gaga

Rahul Kohli is a British actor who is well known for playing Dr. Ravi in the television series iZombie, Owen Sharma in The Haunting of Bly Manor, and for his guest appearances on the YouTube channel Funhaus. His other notable credits include movies such as Supergirl, Happy Anniversary, and the animated TV series, Harley Quinn. Netflix's The Haunting Of Bly Manor is being wi,dely acknowledged. While the entire cast of the show is being appreciated for their work, Owen, played by Rahul Kohli, has become a favorite among viewers.

Also read: Rahul Kohli Refutes Starring In The Mandalorian 2, Fans Not Ready To Believe Him

Other than his acting, Rahul Kohli’s Twitter shows about him living life much like most other hardcore fans. He trolls, he posts playlists, and he watches episodes of Star Wars: Rebels, he is also an avid gamer. On Saturday, October 24, Kohli was seen grooving to My Name is Lakhan while munching pakoras and the internet loves it. He took to Twitter, and the internet went gaga over it.

They asked him about the song, the food and continued telling him that it was possibly the best celebrity video on Twitter. He told his followers on the internet that the food and the song, both were amazing. His post racked up more than 9K likes so far, as several from the online community were impressed with his grooves.

Also read: Internet Is Going Gaga Over 'The Haunting Of Bly Manor's Owen Sharma; Here's Why 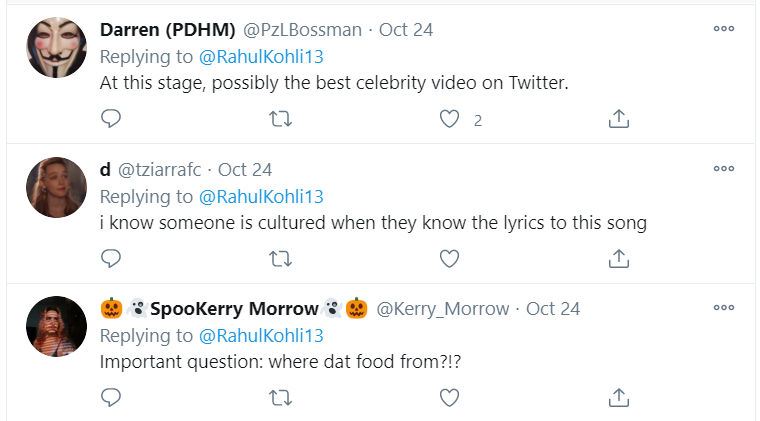 Currently, Kohli is in Vancouver filming Flanagan’s next series for Netflix, Midnight Mass, which has transformed into an intricate operation in the COVID era: tests multiple times a week, monitorization for contract tracing, N95 masks on in between shots. The story is about an isolated island community experiences miraculous events - and frightening omens - after the arrival of a charismatic, mysterious young priest.

On his acting part, in an interview with TV Overmind, Kohli had earlier said that he disliked being stereotyped. He also stated that he would never want to do a role involving ethnic stereotypes, though, with his characteristic sense of humour, he noted that he would make an exception if he was out of money.