India bagged a new world record after a 25-year-old from Chennai solved the most number of Rubik’s cubes underwater. Illayaram Sekar attempted to beat the previous record of solving five Rubik’s cube underwater and succeeded, acquiring the title of Guinness World Record by solving six such cubes in a single breath. Sekar took two minutes and 17 seconds to solve the six Rubik’s cubes sitting inside a transparent tub full of water while being overlooked by independent witnesses.

From saying he solves the Rubik’s cube underwater as if there is no liquid around him to claiming that he is ‘gifted’, thousands of internet users united to hail Sekar. The video posted by the Guinness World records has already received nearly ten thousand likes and numerous views. Many even noted that the 25-year-old could hold his breath for an impressive amount of time. A Facebook user wrote, “Wow..... he could hold his breath for almost 3 mins.”

Someone even noted, “Record for fastest Rubix cube is 3.5 secs I think or more. If someone can solve it at under 10 secs he would be able to solve more”. Another said, “That is truly extraordinary and remarkable”. One of the netizens said, “India will always excel in terms of brain and IQ”. 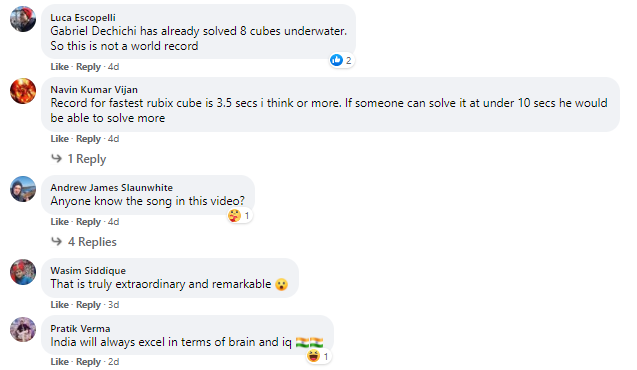