A hilarious video of a pet dog wearing artificial teeth has taken the internet by storm. The video clip was posted by a user named Greg West on Facebook

A hilarious video of a pet dog wearing artificial teeth has taken the internet by storm. The video clip was posted by a user named Greg West who revealed that the pair of fake teeth belonged to his grandmother before revealing that they were stolen by his pet dog. The hilarious clip shows the teeny dog trying to hide after wearing them.

The video has garnered 7.4 million likes and 448 thousand shares. The post also left netizens in splits who took turns to shower comments on it. One user wrote, “That’s too freaking funny!!!!” while another wrote, “I want my Yorkie to do that!” Many others called it hilarious. Another user expressed that it was a cute and adorable gesture. 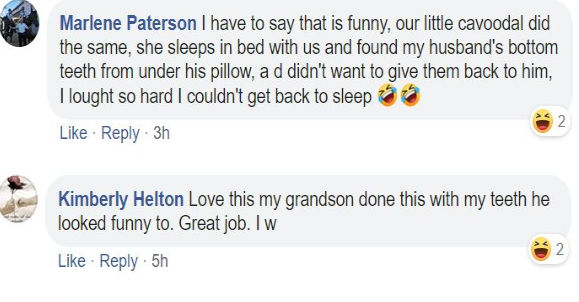 In another hilarious incident, Bristol Police Department’s new K-9 therapy dog, Brody, has taken over the social media after pictures of him sleeping through his own swear-in ceremony surfaced online. The 3-month-old puppy, however, had reportedly woken up early for the event and was in high spirits until he was put on the chief's desk where he snoozed through his investiture.

Officer Keith Medeiros, Brody’s handler, said that the chocolate coloured Labrador “plays really hard and sleeps really hard” while speaking to US media outlets. Turns out the otherwise “very active” dog was having Monday Blues post a very tedious week.  The officer informed the international media that when he’s not playing, Brody is sleeping. The school resource officer also posted the live video on Facebook wherein the comfort dog snoozed with his eyes closed while the officers stood beside him conducting the ceremony. As per international media reports, the police department had first thought of bringing a narcotic or bomb-sniffing dog but then decided to induct Brody, the therapy dog, into the force instead.

Read:  Police Therapy Dog Sleeps Through His Own Swear-in Ceremony, Video Has Netizens In Splits