Ratan Tata, Chairman Emeritus of Tata Sons, took to Instagram on Wednesday to mark the birth anniversary of Jamsetji Nusserwanji Tata, the founder of India's biggest conglomerate Tata Group. Ratan Tata extended his best wishes to the employees and their families and to all Tata Group companies. The 83-year-old industrialist wrote Jamsetji Tata inspired many with his "empathy" and "kindness" over the years.

Tata also shared pictures on his Instagram stories, in one of which he can be seen paying floral tribute to the Tata Group's founder. In another picture, Ratan Tata can be seen bowing down in front of a statue of Jamsetji Tata to honour the man behind India's industrial revolution. 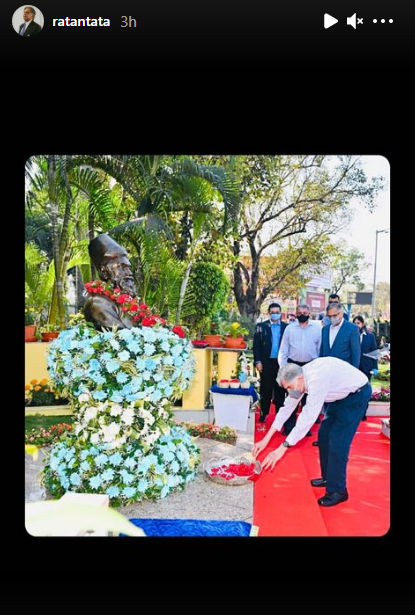 The former chairman of the Tata Group arrived in Jamshedpur on Tuesday to inaugurate world-class Naval Tata Hockey Academy (NTHA). Jamshedpur is named after Tata Group's founder Jamsetji Tata. The city, which was previously known as Sakchi, was renamed in 1919 by Lord Clemsford in order to pay tribute to the man who founded it by establishing India's first steel plant.

Ratan Tata wrote that the founder's day celebrated on the birth anniversary of Jamsetji Tata, reminds him of his predecessor and mentor J.R.D. Tata. Tata also posted a picture with J.R.D. Tata, standing in front of a statue of Jamsetji Tata. The Padma Vibhushan awardee took over the Tata Group after J.R.D. Tata stepped down in 1991. Under Ratan Tata, the group's revenues and profits grew exponentially, turning Tata into a global force.