Assam: Siblings Perform With Drums Made From Cardboard And Steel Tray

Video of a brother-sister giving a musical performance with drums made out of cardboard boxes and a steel tray in Assam has left netizens amused.

Video of a brother-sister giving a musical performance with drums made out of cardboard boxes and a steel tray in Assam has left netizens amused. The video which was recently posted on Facebook shows the girl singing an Assamese song oi mi vhalu lagei while her brother plays the drums. However, instead of the usual plastic and metal, the drum kit is created out of cardboard boxes.

The video features the drums which are made up of wooden sticks and used cardboard boxes while the symbol is made out of a steel tray. The video clip has racked up 463k views, 1.8k comments and 12k likes. Meanwhile, netizens have lauded their efforts and showered praises upon the talented duo. One user wrote, “Can't understand the lyrics of the song but thoroughly enjoyed the performance. “ while another wrote, “God bless you both.” Many others wrote "Darun"  which mean great. 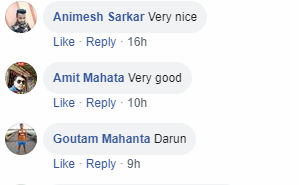 The duo has become an internet sensation after their performance captured people's attention. Meanwhile, in Uk, another kid, an enthusiastic drummer lived his dream when he was invited by one of his favourite bands, 'Slipknot' on stage on January 25. Caleb Hayes, who has been drumming since he was a two-year-old became an internet sensation when his video of air-drumming at the same band's gig in Newcastle went viral. The band members who were impressed by the young boy's skills reportedly extended their invite for Caleb in Birmingham gig. Slipknot not only gave VIP tickets to the 5-year-old but greeted his entire family. The band's drummer, Jay Weinberg also posted pictures with the kid on Twitter.

Following the gig, the boy's mother, Kim Hayes also thanked the band for 'inspiring' her son and proving an 'unforgettable experience'. While talking to an international media outlet, Kim admitted that it was an incredible night for Caleb. The 5-year-old also met the band members backstage and Kim also applauded Slipknot's drummer for allowing Caleb to play his SJC drum kit and for showing around the stage. Kim also reportedly elaborated how music is Caleb's passion and also has a set up of drums so that he can play whenever he wants.