After a 17-year-old high school student interning at the NASA discovered a brand new planet named TOI 1338 b, internet users have begun relating it to BTS. 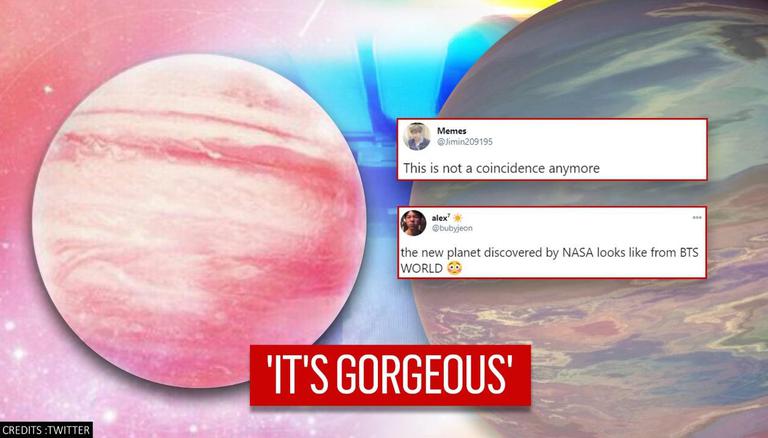 After a 17-year-old high school student interning at the National Aeronautics and Space Administration (NASA) discovered a brand new planet named TOI 1338 b, internet users have begun relating the celestial body with K-pop stars and Ariana Grande among other celebrities with ‘same aesthetics’. The planet was discovered back in 2019. Now a Twitter user with name @paintwater_boba shared three images of the planet on January 17 and the netizens ‘can’t keep calm’.

The planet, according to NASA is 1,300 light-years away and appears to be painted with watercolours with subtle shades of purple, pink among others. The user’s tweet not only went viral on the microblogging platform but netizens called it ‘The BTS planet’ or ‘This is where Ariana came from’. The tweet has already garnered over 1.2 million likes with thousands of tweets and retweets. Many netizens said that they are ‘packing bags’ and leaving Earth, the green planet for the ‘pink one’. Many even shared the album images or other screenshots trying to 'prove' that 'who found the planet first'. One of the Twitter users said 'it's not a coincidence'. Here are some of the reactions:

This is not a coincidence anymore, first the purple lightning, the blackswan 7 shape in space , the heart shaped purple planet like BTS world purple heart during lightning during LY era, and now NASA Found a new planet look at the colors it's like BTS World 😭💜 pic.twitter.com/CR6k4wt3U7

the new planet discovered by NASA looks like from BTS WORLD 😳 pic.twitter.com/4TgzxwKaf8

Nasa found a taekook planet in the space 🥺 pic.twitter.com/7whdWvjmN2

In case you haven't already seen, NASA found a new planet.
It should be named forbidden gobstopper. pic.twitter.com/EdInq5qprx

omg this is also the planet where twice landed with their lotus spaceship to perform the last chorus in that colorful canyon in I can't stop me mv lol pic.twitter.com/DEdPYuFWsr https://t.co/03lUhLH9NC

Read - 'Like Sands Through The Hourglass': NASA's Curiosity Rover Completes 3,000 Days On Mars

While explaining the planet, NASA said that it is a 'world orbiting two stars' and is TESS’s first circumbinary planet. The US space agency said, "TOI 1338 b, as it is now called, is TESS’s first circumbinary planet, a world orbiting two stars". The discovery was featured in a panel discussion at the 235th American Astronomical Society meeting in Honolulu

"The TOI 1338 system lies 1,300 light-years away in the constellation Pictor. The two stars orbit each other every 15 days. One is about 10% more massive than our Sun, while the other is cooler, dimmer and only one-third the Sun’s mass," it added.