Fact check: There have been reports regarding the Ministry of Railways that they have issued some new railway rules for after the lockdown is lifted. Read more.

Social media is not just a way of entertainment but has now become a hub of news updates and information as well. Sometimes, however, there is a transfer of fake and false news which can lead to serious consequences. People unknowingly share the information which can be highly misleading. In recent online news, there have been claims that the Ministry of Railways has issued a protocol for the passengers for their travel after the lockdown period.

ALSO READ | Coronavirus Fact Check: A Week Of Fake News Around The Pandemic

There have been reports across many news and media portals that the Ministry of Railways has put forward some important railway rules after lockdown for the passengers. While some of these claim that masks will be made compulsory, others also say that migrant workers will be given a priority for reservations and travel. These sources also claim that the passengers might have to reach the station four hours prior to the train's timings. As per a regional news source, they will be provided with masks and gloves. There will be a special tunnel set up at the entrance of stations which will help in sanitization. These train rules after lockdown also have the information that the Northern Railways will start 307 trains, out of which 133 are already reserved.

The official Twitter account of the Ministry of Railways tweeted that there is no such protocol with regards to passenger travel that is been issued by the railways. The tweet also claims that if there are any changes regarding the same, the concerned officials will be informed about it. The Press Information Bureau also tweeted about the same, denying the rumours.

Ministry of Railways has not issued any protocol regarding passenger travel during post lockdown period, as has been incorrectly reported in some media reports

As and when a decision is taken, all stakeholders would be intimated. Please do not be guided by any misleading report

Rumours and media reports, claiming that protocol has been issued by @RailMinIndia regarding passenger travel for post - lockdown period, are speculative and incorrect.

Please rely only on the authentic information given by the Ministry.

The misleading reports were given by some official media sources and were then shared by on Twitter, Facebook and other social media portals. After making an official announcement of the fake news with a tweet, an official press release was shared by the Ministry of Railways as well. The press release addresses the fact that there can be unnecessary speculations in the minds of people in these extraordinary times hence the media must be very careful and not release premature reports:

Since the time the Indian Railway news information has been taking rounds of the internet, people have searched about the same on Google as well. The searches saw a peak at 7.30 PM on April 9, 2020. Check it out here: 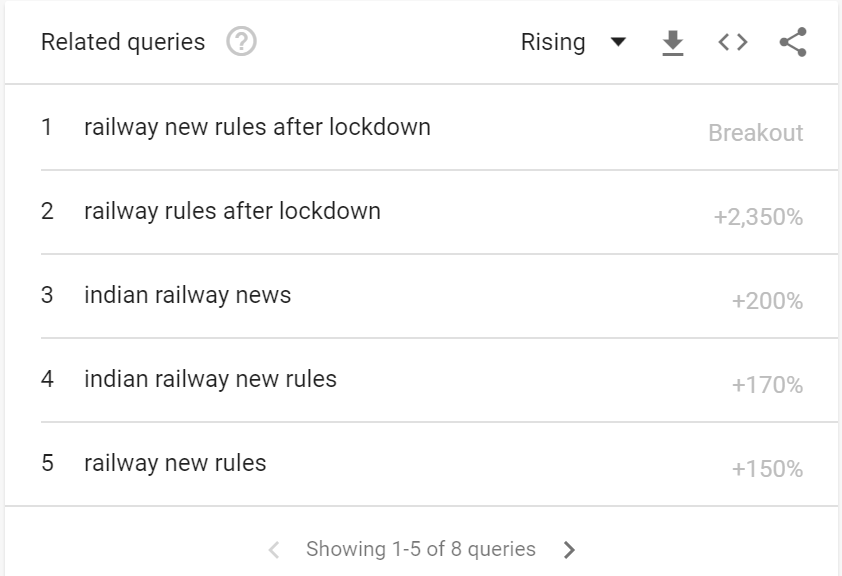 ALSO READ | Fact Check: Is The Picture Of A Soldier Carrying A Donkey On His Back From World War II?