Fact Check on whether the American company General Electric was sold to China? Read on to know the facts about the latest Facebook meme that went viral.

Is the American company General Electric sold to China?


A Facebook meme was recently in circulation on the social media where it stated that the American company General Electric is going to be sold off to China for 5.4 billion dollars. The meme then asked the viewers a question stating "Americans are you concerned yet?" The Facebook post was shared by a user named Hal Downing, who posted the meme on December 23, 2020. However, the meme was circulated all over social media and is under the viewer's attention till now. Here is a fact check on whether General Electric was sold to China. Check out how the viewers seem to be reacting based on this rumour. 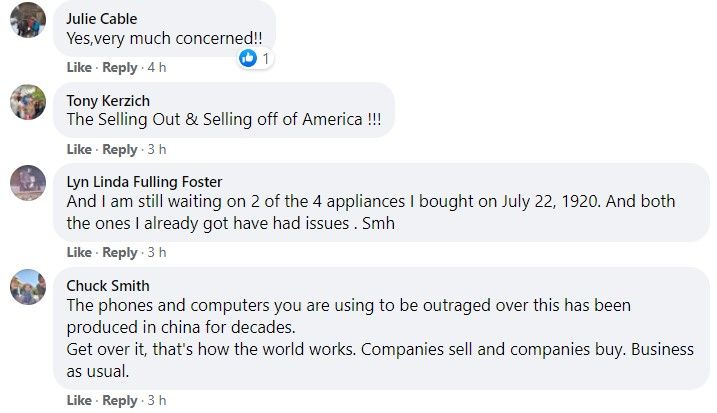 Was General Electric sold to China?

ALSO READ| Fact Check: Did 250 Million People Gather For A Strike In India Over The Farm Laws?

According to Google Trends, the maximum number of people to have searched about whether General Electric was sold to China or not was the highest on January 5th. The Facebook meme has been circulated all over the internet as the Trends have skyrocketed in the few days. The current trends show that the people are still talking about the rumour. Check out this graph.

WE RECOMMEND
WHO chief 'disappointed' after China blocks entry for experts studying Coronavirus origin
Fact check: Did NASA confirm that the Earth is going dark in December due to solar storms?
Fact Check: Did 250 million people gather for a strike in India over the Farm Laws?
Fact Check: Did Chinese Army use 'microwave weapons' against Indian soldiers at LAC?
Trinamool 'fact-checks' Amit Shah for claiming Mamata Banerjee 'defected from Congress'