Fact Check: Did Chinese Army Use 'microwave Weapons' Against Indian Soldiers At LAC?

Amid the LAC faceoff, China's People Liberation Army used 'microwave weapons' to make the Indian Army personnel retreat from two critical hilltops on the south of the Pangong Tso Lake.

A news report published by the UK daily The Times on November 17 claimed that the Chinese Army used 'microwave weapons' against Indian soldiers to make them retreat from two critical hilltops on the south of the Pangong Tso lake. This was solely based on the claim by Jin Canrong, a professor of international relations at the Beijing-based Renmin University.

As per the report, microwave weapons are equipped with "high-frequency electromagnetic pulses" to cause irritation and pain. The professor was quoted as saying that the Chinese troops turned the hilltops into a 'microwave oven' by firing a microwave weapon from the foot of the hills. The professor added that the PLA retook its lost territory without an exchange of fire as the Indian soldiers reportedly escaped after beginning to vomit within 15 minutes of the microwave weapons' use. This report was shared on social media by many users. 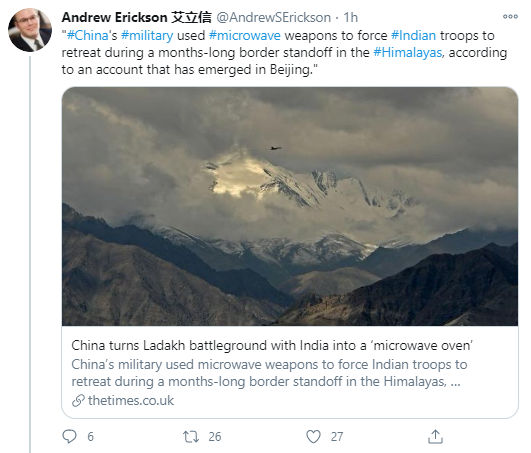 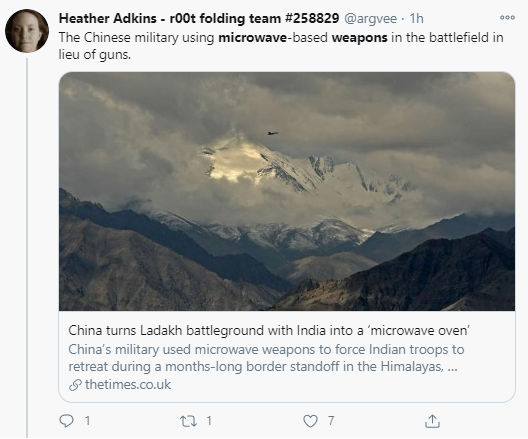 The faceoff at the Line of Actual Control was exacerbated when 20 Indian Army soldiers including a Commanding Officer were martyred in the Galwan Valley on June 15 when the de-escalation process was underway. Subsequently, both sides have held several rounds of talks at the military and diplomatic levels. The news report's credibility comes under doubt as neither side has officially revealed the precise location where its troops are stationed.

Moreover, both countries have not disclosed that any such tiff between the two sides has taken place. In an official clarification, PIB rubbished this news report calling out its "misleading headline" and "baseless claims". Even the Indian Army has made it clear that such an incident hasn't taken place.

Some international news portals have published misleading headlines and reported baseless claims related to India-China border stand-off in Ladakh. #PIBFactCheck: This claim is #Fake. @adgpi has clarified that no such incident has taken place. Beware of such #misinformation. pic.twitter.com/EoH4CH3X13

After the news report went viral, many people in India started searching for 'microwave weapon' on Google.