Fact Check: Does An 890 Prefix In A Bar Code Indicate That The Product Is Made In India?

Fact Check: There has been a post circulating on social media portals that claims that the barcode for products made in India has the numbers 890 as a prefix.


The Prime Minister of India, Narendra Modi asked the citizens of India in his recent speech to use as many Indian products and locally manufactured products as possible. Since then, there have been many messages and posts on Twitter and other social media portals that send out an appeal to not use any products that come from other countries. Along with these messages, there were certain posts that claimed that looking at the barcode given behind the product, one can determine whether it is made in India or someplace else.

ALSO READ | Fact check: After murder hornets, are flying spiders coming to invade the US?

The picture showing the differentiation between Chinese and Indian products was shared on Twitter and it slowly started spreading across all social media. The picture shared in this message claims that Chinese products have barcodes in which the first 3 digits are from 690 to 699. This indicates that they are from China. It then says that barcodes that have the numbers 890 as the first three digits belong to India. 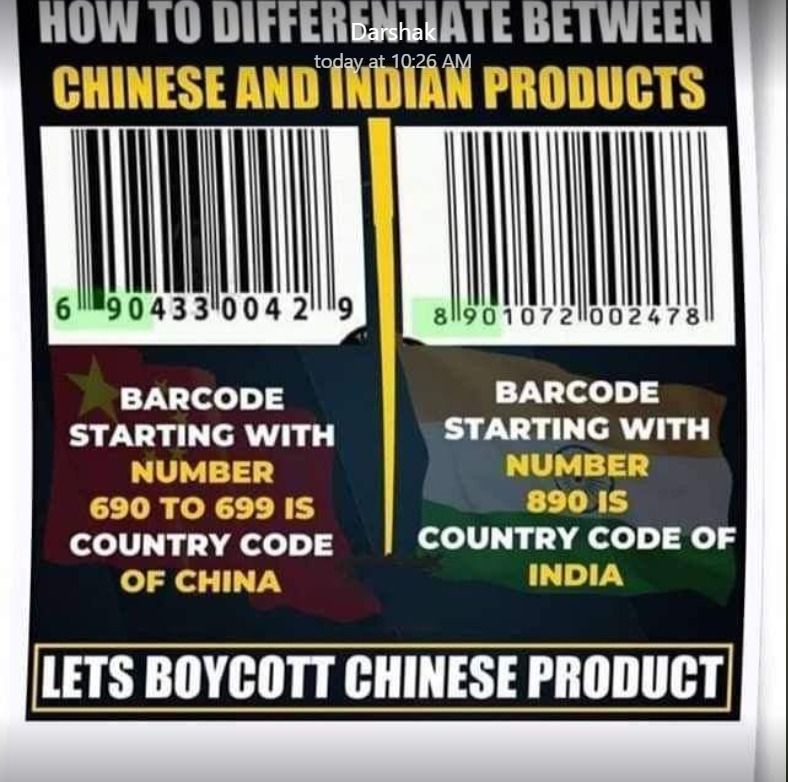 Nowadays, Chinese businessmen know that consumers do not prefer products 'made in china', so they don't show from which country it is made. However, you may now refer to the barcode, remember if the first 3 digits is 690-695 then it is Made in China. pic.twitter.com/GWkCZbooWP

Mahesh Vikram Hegde@mvmeet
·
14 à®®.à®¨à¯‡.
How to differentiate between Chinese and Indian Products

Barcode starting with number
890 is country code of India

Barcode for products made in India

The first three digits of any country depend on various bar code standards that the country follows. While countries in Europe go for the European Article Number, the US follows the UPC-A bar code. As per Barcode 1, the 890 barcode comes from GS1 India. It debunks the myth that this barcode number shows the country of origin. Rather, the first few digits show the country of origin of the barcode number, not of the product. Thus, the products having barcodes that start from 890 are not necessarily produced in the country. As given in the FAQs of GS1:

As given on the site BarCode 1:

Giving an example, if a French company imports some product from India and ships it to Ireland, the country code of the product’s barcode might indicate the French origin. So if people in Ireland are not eating Indian products, they will have no idea that the product is originally from India.

ALSO READ | Fact Check: Is there a proposal for a 30% deduction in government employees' salaries?