India's COVID Cases Took 64 Days To Climb From 100 To 1 Lakh: How Does It Stand Globally?

India's COVID-19 cases climbed from 100 to one lakh in 64 days, which is more than twice the number of days when compared to the USA and Spain

Even countries such as Germany, France, United Kingdom, among others, that have agreeably more advanced healthcare facilities, witnessed the rise from 100 to one lakh cases in a lesser number of days when compared with India.

According to the comparison table by Worldometers, the USA, Spain, and Germany took 25, 30, and 35 days, respectively, to breach one-lakh tally. Even Italy (36), France (39), and the United Kingdom (42) were inferior to India in slowing down the spread of infection.

Here is the graph by Worldometers 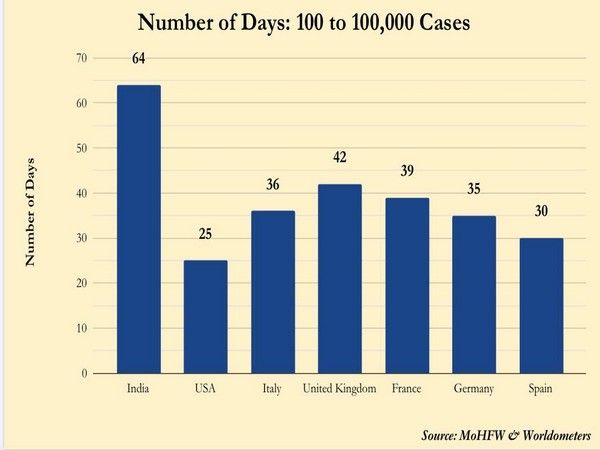 It is a remarkable achievement considering India's population is the second-largest in the world, next only to China, and it edges out to the USA, which has the third-highest population. India also has one of the lowest COVID-19 mortality rates at 3.2 percent, Union Health Dr Harsh Vardhan had said on May 12.