In a major shocker for Rabindra Bharati University, a group of youngsters were seen sporting abuses and Bengali slangs disrespectful to Rabindranath Tagore 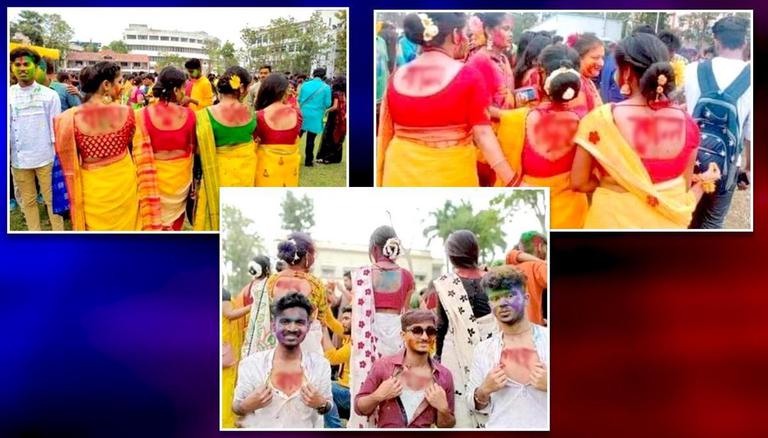 In a major shocker for the esteemed Rabindra Bharati University, a group of youngsters were seen sporting abuses and Bengali slangs disrespectful to Rabindranath Tagore's poetry. The distasteful messaged had been drawn with gulal on the bodies of youngsters. The incident has caused quite a flutter, both within the university and outside, especially among Tagore lovers.

Students of Rabindra Bharati University in Kolkata celebrated Basanta Utsav (Holi) in their campus, in accordance with their tradition. The shocking images of those using objectional cuss words went viral on social media. University authorities were quick to take up the matter and started screening the pictures and checking whether they were students of the university or not. The mass celebrations are an open-to-all event just like the 'dol' or 'Basanta Utsav' festivities held every year at Vishwa Bharati University in Shantiniketan.

READ | Over 1,200 Quarantined So Far In Kolkata Amid Coronavirus Scare

"Its extremely sad and we have written to VC to take the ones who have done it to task. No student from our university would do as we are emotionally connected to Tagore and our University. No student will bring shame to their university," said a female student of RBU, who also stated that following the incident, entry of outsiders in the university campus henceforth for such celebrations will need to be checked and if required stopped.

A formal complaint was registered at Sithi Police Station by the authorities following which five of the accused came to the campus and surrendered in front of university authorities after apologising. The five are of the opinion that another person was a part of their group. None of them are students of the university. Although, a formal complaint was registered with the police, they have not been arrested yet and search for their sixth partner is on. The incident has faced massive criticism from all sections of society especially the cultural sector.

Assassination of Rabindranath Tagore at Kaviguru's place, Rabindra Bharati University... Such a shame! Where are we heading!!!#RBU#BanRoddurRoy #Tagore #EiSamay pic.twitter.com/9yNHSwMHjD

Basant-Utsav in RABINDRA BHARATI UNIVERSITY has simply reduced in a show of dabauchery & offenders must be rusticated and stringent lawful action must be initiated at the earliest! #basantautsav @Suhelseth @MamataOfficial @FirhadHakim