On Wednesday, Union Minister Piyush Goyal revealed that the trade deficit between India and China dipped to 5.48 billion US dollars in April-June this year.

On Wednesday, Union Commerce and Industry Minister Piyush Goyal revealed that the trade deficit between India and China dipped to 5.48 billion US dollars in April-June this year. As against this, the deficit in trade for the same period in 2019 was 13.10 billion US dollars. In a reply to an unstarred question by BJP Lok Sabha MP Manoj Kotak, Goyal mentioned that the Centre had consistently taken steps to balance the trade with China by increasing exports and reducing India's dependence on imports from the neighbouring country.

Replying to Congress MP Deepak Baij's question, Goyal stated that the export of items from China to India such as petroleum products, organic chemicals, plastic raw materials, cotton yarn, bulk mineral and ores, electrical machinery, auto components and cotton raw fell in 2019-20 as compared to 2018-19. On the other hand, he noted that the major items which exhibited a reduction in India's imports from China from April-July 2020 include accumulators and batteries, man-made yarn and fabric, aluminium and its products, glass and glassware, paper, paper board and products and other plastic items. According to him, the Centre has implemented policies to promote domestic manufacturing in line with the vision of Atmanirbhar Bharat. 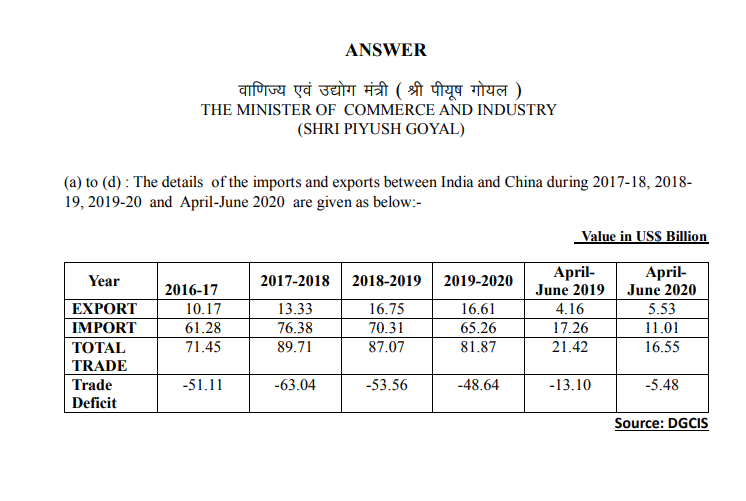 The faceoff with China at the Line of Actual Control led to a demand for drastically altering the economic relationship with China. The customs duty has been increased on 89 items such as footwear, toys, furniture and pressure vehicles to curb non-essential imports. Moreover, restrictions have been imposed on 13 items in the last year which includes items imported from China. As per a notification in June, the import of tyres for bicycles, cars, motorcycles, buses and lorries were restricted. They can be imported only with a license from the DGFT.

Furthermore, FDI coming from China is allowed only through the government route. The average time taken by the DGTR to initiate and complete anti-dumping investigations has come down to 33 and 234 days respectively.  Additionally, the Public Procurement (Make in India) Order was revised to ban the participation of foreign suppliers where the estimated value of the purchase is less than Rs.200 crore. The Reciprocity Clause was invoked against countries which discriminate and restrict Indian companies to participate in their procurements. Additionally, the Information and Technology Ministry has banned 224 Apps of Chinese origin including TikTok, WeChat and PUBG.