Amid infighting within leaders of Congress party ahead of assembly elections in Maharashtra & Haryana, a party leader has levied allegations against Priya Dutt

Amid the infighting within the leaders of the Congress party ahead of the crucial assembly elections in Maharashtra and Haryana, a local leader has levied serious allegations against Priya Dutt. In an email to Congress interim chief Sonia Gandhi, former Corporator from Kalinga Brian Miranda and his wife Tulip, who is the present Corporator from Kalinga, have expressed dismay with the naming of George Abraham as its candidate from the seat in the Maharashtra assembly polls.

In a sensational claim made by Miranda in the mail to Sonia Gandhi, he has alleged that Priya Dutt has once again managed to sell tickets for 175 Kalinga Assembly seats. Brian Miranda alleged that Priya Dutt is taking advantage of his close ties with Sonia Gandhi and the top brass of the party. Brian Miranda has also called former MP Priya Dutt a "failure", alleging that the 'Dutt influence has dwindled off in public'.

She also claimed that the three candidates backed by Priya Dutt will lose the elections - Zeshaan Siddique, Asif Jekaria and George Abraham, who has been fielded by Congress from the Kalinga assembly seat. He won the election of the corporation 14 years ago. 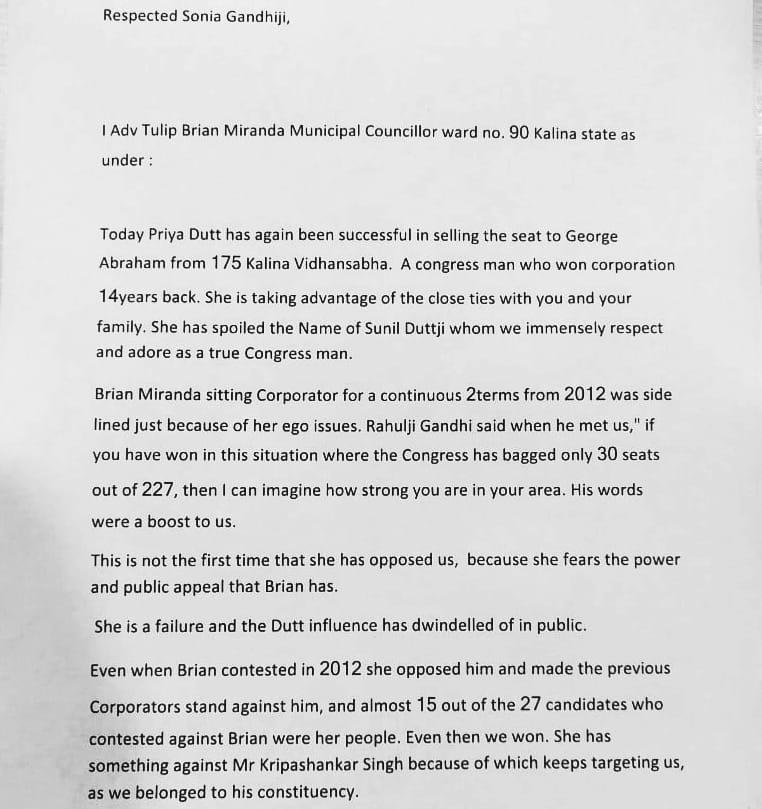 WATCH | 'On The Road' With Congress candidate Priya Dutt as she opens about past, present and future politics

This development has come on a day when Mumbai Congress chief Sanjay Nirupam slammed the party leadership on Thursday. Addressing a press briefing, Sanjay Nirupam exposed the Congress party, making some sensational remarks and allegations at the leaders within the party. From claiming that there is an internal conspiracy in the party, to revealing that Congress has ignored the Muslim votebank, Sanjay Nirupam took the party with his remarks. He also maintained that he will not be participating in the campaigns of the Congress party for assembly elections.

It seems Congress Party doesn’t want my services anymore. I had recommended just one name in Mumbai for Assembly election. Heard that even that has been rejected.
As I had told the leadership earlier,in that case I will not participate in poll campaign.
Its my final decision.