In a shocking incident, Rinku Sharma, a 25-year-old man, was stabbed to death allegedly by four men following a quarrel at a birthday party in outer Delhi's Mangolapuri area, according to police officials.

The deceased got into a heated argument with the four men at a birthday party on Wednesday night. The four accused later went to the victim's house and stabbed him with a knife, police officials said, according to news agency PTI. All the four accused -- Zahid, Mehtab, Danish and Islam -- were arrested on Thursday, police said.

The police said both Rinku and the accused men had an argument over their eatery business which had to be shut down after they started incurring losses. They, however, said that these facts are being verified. According to the police, on Wednesday night, when both the victim and accused men were attending the birthday party, an argument broke out between them over their food joints in Rohini. They also slapped and threatened each after which they left.

Later, the four men went to Sharma's house where the victim along with his elder brother was already standing outside with sticks. A scuffle broke out between the two sides again during which the accused stabbed Sharma and fled from the spot, a senior police officer said. The victim was then rushed to a nearby hospital where he succumbed to his injuries, he said.

However, the Vishwa Hindu Parishad (VHP) leaders have claimed that Sharma was associated with the organisation and was killed because he was collecting donations for Ram Temple at Ayodhya. "We urge the administration to arrest the culprits without delay and ensure the strictest punishment to them," said VHP joint general secretary Surendra Jain. According to sources, the VHP leaders will be meeting Rinku's family later in the day.

BJP's Shobha Karandlaje in a tweet said, "A peaceful group walks into the house of #RinkuSharma & stabs him to death, his mistake is that he was collecting donations for #RamMandir. Does the Lutyens ecosystem has the courage to question this lynching? Will the award wapsi group condemn this brutality? #JusticeForRinkuSharma" 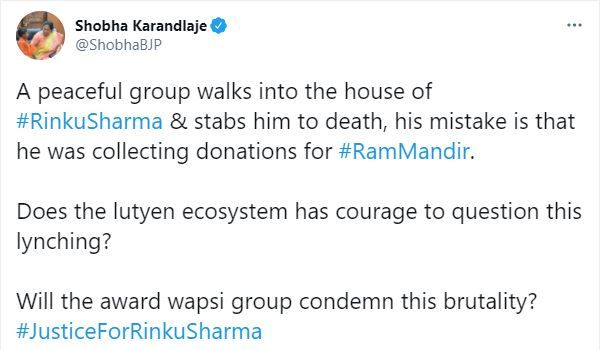 I Am With Rinku Sharma's Family .

The police, however, has denied these allegations. Sudhanshu Dhama, Additional Deputy Commissioner of Police (Outer) said, "All the four men have been arrested and a case has been registered against them."

On 10.2.21 eve,a scuffle ensued during a birthday party in the area of Mangolpuri,following which Victim Rinku Sharma got injured in stabbing, who later succumbed to injury during treatment.A case under relevant sections was registered & all 04 accused were arrested@DelhiPolice

So far, during investigation it has surfaced that quarrel started during a birthday party over shutting down of a restaurant. @LtGovDelhi @CPDelhi @DelhiPolice @ssyips

All persons are known to each other and live in the same locality. Any other motive alluded to this incident is factually wrong. @LtGovDelhi @CPDelhi @DelhiPolice @ssyips

READ | 'Should be proud of Koo app': IT Minister names & shames 'genocide trending' Twitter in RS