In an unprecedented move, soon after the restoration of internet services in Aligarh on Sunday, teachers, students & non-teaching staff expelled their V-C

In an unprecedented move, soon after the restoration of internet services in Aligarh on Sunday, the teachers, the students and non-teaching staff expelled their Vice-Chancellor. Releasing a notice stating the above, they said that they have expelled their V-C Prof Tariq Mansoor and their Registrar S Abdul Hamid. They notice stated that the V-C and Registrar are requested to vacate the V-C lodge and Registrar's lodge. The notice declared that the collective authority will boycott university administration untill the two resigns and leaves the campus. This comes days after clashes took place between AMU students and UP Police amid protest against the Citizenship Amendment Act.

Here is the notice: 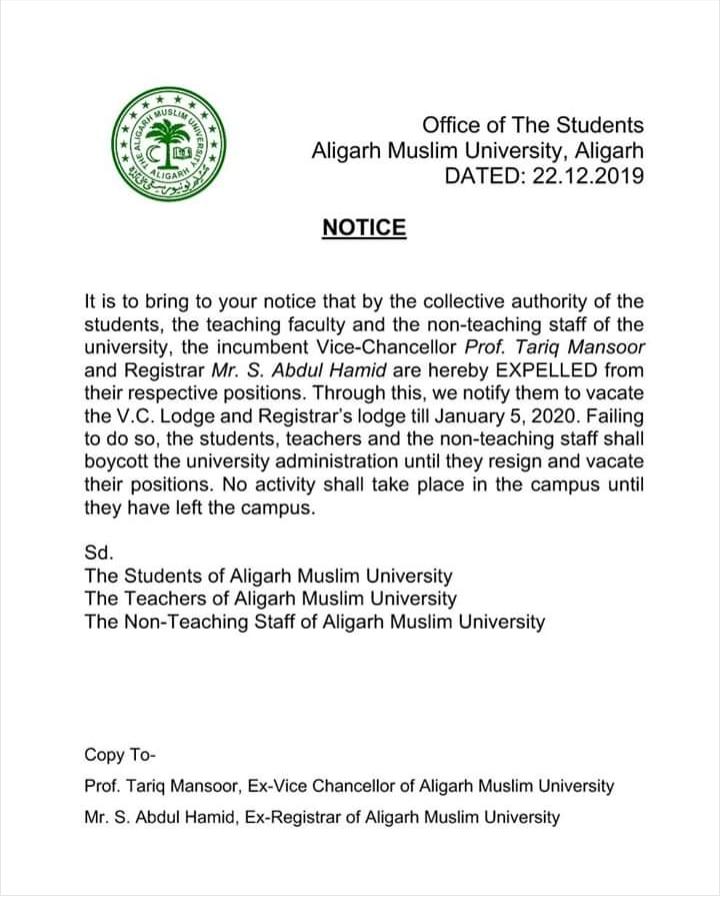 Seven days after internet connections were snapped in Aligarh, following protests over the Citizenship Act, the authorities restored the service on Sunday. Informing about the shutdown the District Magistrate had said on December 15, "After the protest in the Aligarh Muslim University by students today, it cannot be denied that some anti-social elements can incite violence among the people using internet services to circulate inflammatory messages or content on social media, so to prevent that internet services remain suspended from 10 pm tonight till 10 pm tomorrow." However, the shutdown continued for over a week.

Following a clash between AMU students and Police, the Registrar of AMU Abdul Hamid had said that the university would remain closed till January 5, 2020, due to the present situation in the wake of protests against the citizenship law. Earlier on Thursday, Vice-Chancellor Professor Tariq Mansoor had said, "Protestors should protest in a democratic and peaceful way. The sentiments should be conveyed in a lawful manner. If not, it will be exploited politically." The AMU administration had also claimed that only 7 of those detained by the Police during the protest were the students of AMU. This statement came as soon as three advocates released a list of 21 students and two AMU employees who they said were either missing or had been detained without the varsity authorities being informed.

On Sunday, students who were protesting had marched towards the main campus gate where they were allegedly attacked by police using tear gas shells, rubber bullets, stun grenades, pellets, and stones. Students allege that police and Rapid Action Force personnel forcibly entered the campus to detain the protestors. While police deny these claims, over 17 policemen were injured after protestors allegedly began to vandalise public property and torched up buses, while pelting stones. More than 60 students were also injured in the clashes.