Arnab Goswami has expressed his gratitude towards all the people who came out in solidarity with him and Republic Media network, against Mumbai Police

Time and again, the people of India have proven their tremendous support and their firm standing with Republic Media Network and its Editor-in-Chief Arnab Goswami amid the ongoing witch-hunt by the Param Bir Singh-led Mumbai Police.

The citizens have constantly backed Arnab Goswami and Republic to carry on fighting for the truth, pledging their unending support to the Network and its affiliates. This overwhelming support was evident on Thursday morning, as the hashtag "#NationWithFearlessArnab" became the top trend on Twitter and massive support poured in from across the country for the channel. 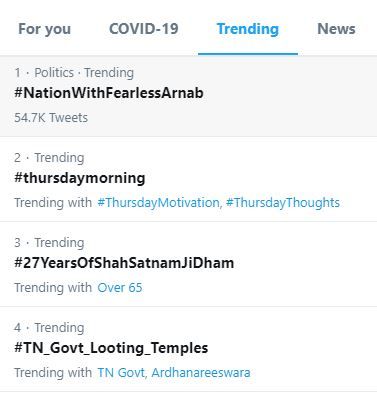 Following this, Arnab Goswami has expressed his gratitude towards all the people who came out in solidarity with him and the network, against Mumbai Police's brazen attack on press freedom.

"I feel absolutely blessed to receive the love and faith of so many people this morning. We are together in this battle, and many more. The state machinery unleashed on us is making us all stronger, every day."

Arnab: Sushant fans, let me tell you the truth. We are the only channel fighting for SSR. Everyone else has compromised. It's good to be alone in a good fight. The whole campaign against us is because they think we are alone. But we are NOT.

Arnab: I want to ask the Lutyens media and the foreign-owned digital media in India, end your endless lies. Fight for Palghar, for SSR, defeat those who spread fake news on Hathras. Otherwise all Indians will reject you.

Arnab: The TRP case was a fake one. The Lutyens channel which is in court explaining the proven TRP manipulation case against it has gone quiet when the case collapsed. People of India, expose these hypocrites.

Arnab: The Congi IT cell thought they will crush Republic. These fools don't realise we have become stronger after their coordinated and orchestrated attack. Much stronger ðŸ’ªðŸ½

Arnab: Some defeated souls in the Lutyens media met four days before Param Bir's press conference. Planned in a Noida channel office on how to crush Republic. Their real issue: Republic Bharat becoming no 1. CBI should investigate the leads.

Arnab: I wonder why some defeated souls are quivering and having a fit about a CBI inquiry. It's amusing, but suspicious as well. Is there some skeleton walking in their gardens?

In a show of massive support for Republic Media Network and its Editor-in-Chief, netizens began a movement on Twitter, making #NationWithFearlessArnab the top trend within minutes. The hashtag has attracted more than 57k tweets by 11am on Thursday with users writing: "Truth can not be suppressed and always is the ultimate victor. The voice of Arnab and Republic who stand for and with the public can never be suppressed."

Here's the overwhelming support pouring out from across India for Arnab Goswami and Republic channel.

Truth can not be suppressed and always is the ultimate victor.

The voice of Arnab and Republic who stand for and with the public can never be suppressed.
#NationWithFearlessArnab pic.twitter.com/Rc7B8iVCLJ

ARNAB STOOD FOR YOU WHEN WE WERE DEMANDING JUSTICE!!

Now,
India Must Support Him When There's Attack On Team Republic.

Arnab is the "Voice and choice" of Nation.#NationWithFearlessArnab

It's a Courageous act to just be with whatever is happening at the moment,the difficult as well as the Wonderful-all of it by the FEARLESS MAN, Hence

FEARLESS JOURNALISM is not everyone's cup of tea !

Being sold out is easy but standing n fighting for TRUTH n JUSTICE needs Courage !

They attacked him because he raised his voice of right!

They attacked him because he is continuously Fighting for Justice 4 SSR!

They attacked him because he Exposed the True Faces of Culprits!

READ | Global Body CPJ Calls Out Mumbai Police; Tells It To End Its Witch-hunt Against Republic

In total, Republic Media Network's management & editorial staff have endured over 150 hours of questioning in a variety of cases that are beyond the initial fraud TRP matter in which there had been an effort to implicate Republic. The Mumbai Police summoned Republic's Output Editor Sagarika Mitra, who was questioned for 2 hours on Tuesday. Shortly after, Senior Associate Editor Shivani Gupta was called in for questioning by the Mumbai police.

The latest summons came after Republic’s Senior Associate Editor Shawan Sen and Executive Editor Niranjan Narayanaswamy were questioned on Saturday. The duo was questioned again on the story wherein Republic had shared that Mumbai Police officers were unhappy with commissioner Param Bir Singh amid the witch-hunt against Republic. The journalists maintained that they won’t reveal their sources.

The Param Bir Singh-led Mumbai Police's brazen attempt to strike on press freedom has been exposed through the multiple sessions of unnecessary interrogation sessions. Taking it a step further, in a never-seen-before move, the Param Bir Singh-led Mumbai Police filed an FIR against the entire editorial team of the Network, invoking a 1922 British Raj-era law that had last been used in the Emergency-era.

Recently, citizens who walked silently in support of Republic & Arnab also had their details taken and were questioned on their intentions.