NHRC, on Friday, has issued notices to Maharashtra chief secretary and the Aurangabad District Magistrate after 16 migrants were mowed down by empty rake

Taking cognizance of the Aurangabad accident, the National Human Rights Commission (NHRC), on Friday, has issued notices to Maharashtra chief secretary and the Aurangabad District Magistrate. The officers have been directed to submit a detailed report, within four weeks into the incident. 16 migrant labourers were mowed down by an empty goods train between Badnapur and Karmad stations in Nanded Division. 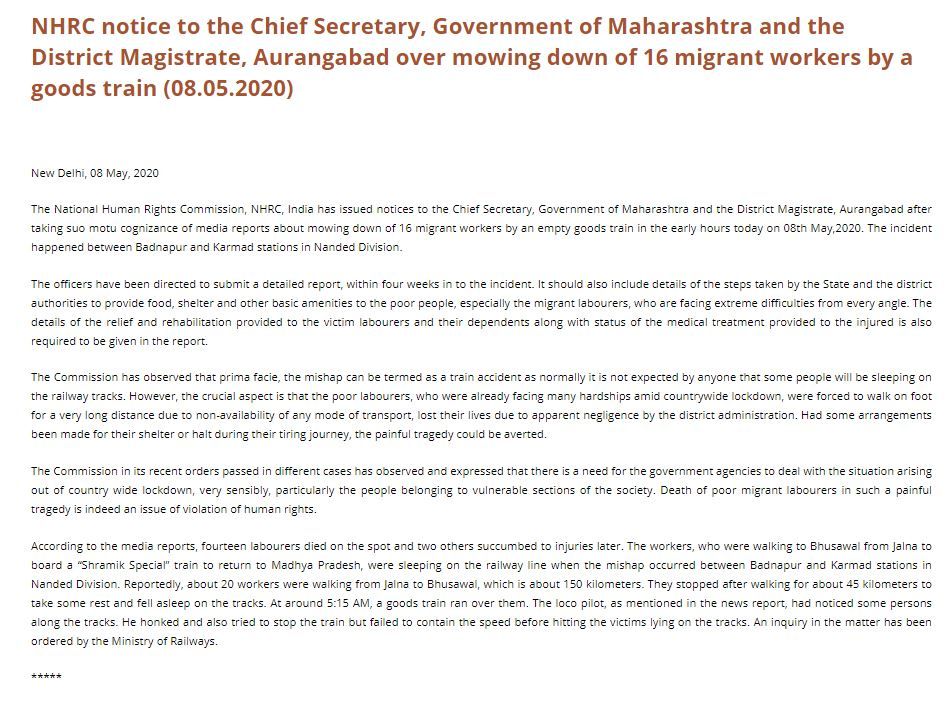 Earlier in the day, Maharashtra Chief Minister Uddhav Thackeray announced an ex-gratia of Rs 5 lakh to the family members of the deceased.  Prime Minister Narendra Modi took to Twitter to express his anguish over the loss of lives as 16 persons, believed to be migrant workers. PM Modi said he had spoken to the Railway Minister and assured all possible support.

Union Railway Minister Piyush Goyal stated that an inquiry had been launched into the matter. He tweeted, "Today at 5:22 AM, there was the sad news of sleeping workers coming down the goods train between Badnapur and Karmad station of Nanded Division. Relief work is going on, and orders for inquiries have been given".

In the early hours of May 8, an empty rake of goods wagon ran over 16 people who were sleeping on the tracks while walking a long distance, near Karmad, Aurangabad. The workers, who were walking to Bhusawal from Jalna, were returning to Madhya Pradesh, an official at the Karmad police station told news agency PTI. They had been walking along the rail tracks and slept on the rail tracks due to exhaustion, said Chief Public Relations Officer (CPRO) of South Central Railway. They were mowed down by the train at 5.15 am, the official added.