Amid the growing criticism over the nomination of former CJI Ranjan Gogoi to the Rajya Sabha, the Bar Council of India (BCI) lauded the move on Wednesday.

Amid the growing criticism over the nomination of former CJI Ranjan Gogoi to the Rajya Sabha, the Bar Council of India lauded the move on Wednesday. Echoing the views expressed by Gogoi to an Assamese news channel, the BCI opined that this would be an ideal opportunity to portray the views of the judiciary before the lawmakers and vice versa. Moreover, it contended that the “reckless comments” of some former judges and lawyers was an attempt to malign the judiciary.

The Bar Council of India also sought to address the criticism over the manner of the former CJI’s entry into Rajya Sabha. It highlighted that there was a marked difference between the election of former judges and Gogoi’s nomination. Hailing the nomination route as the best possible way of entering the Parliament, it clarified that Article 80(1)(a) of the Constitution was meant for people like Gogoi only. Maintaining that Gogoi had performed as the CJI to the “full satisfaction” of the nation, the Bar Council urged former judges and lawyers to refrain from criticism in this case. Furthermore, it predicted that this decision will prove to be a “landmark” one and thanked President Ram Nath Kovind as well as the Centre. 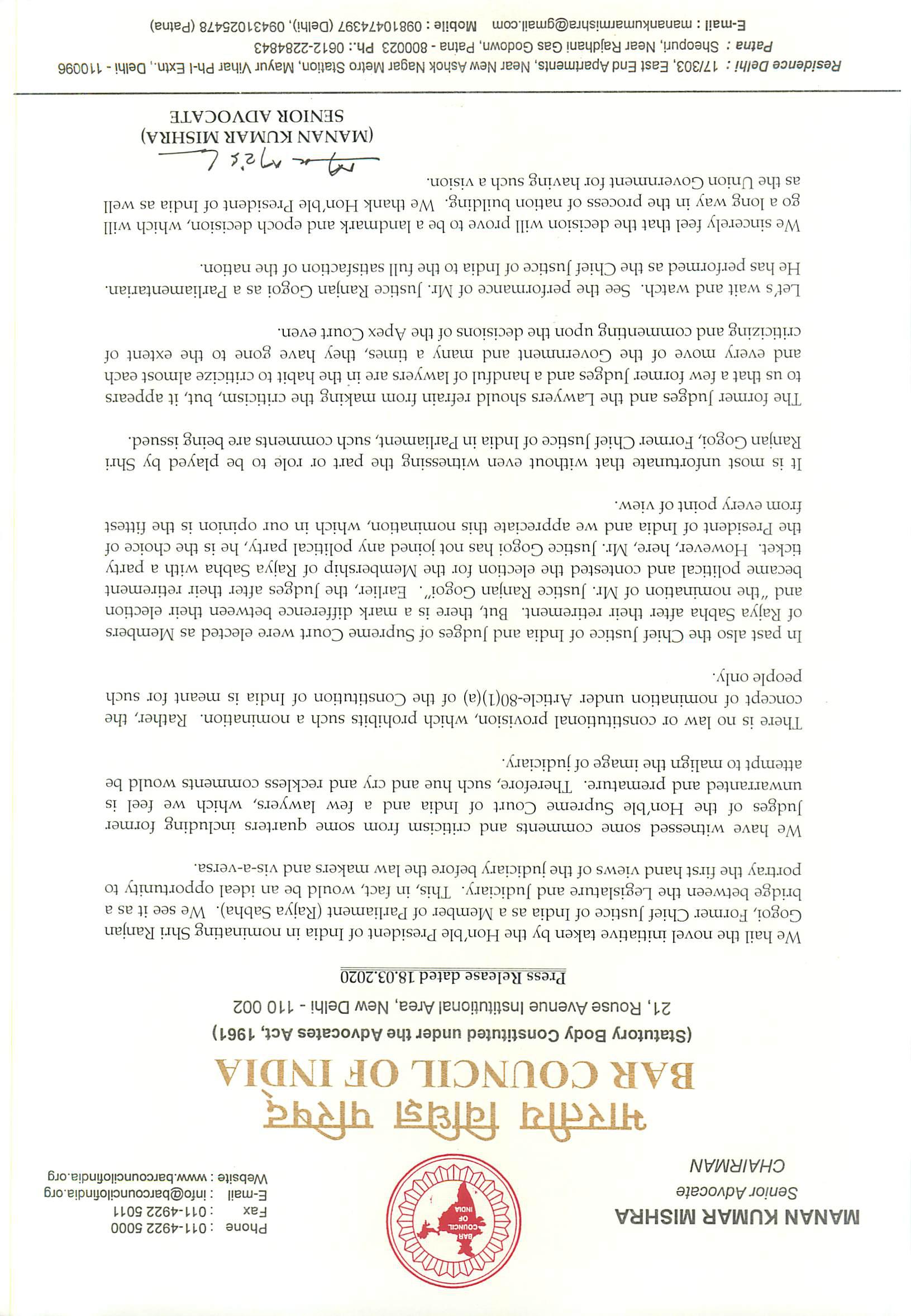 Read: BIG: Ex-CJI Ranjan Gogoi To Take Oath As Rajya Sabha MP On Thursday; Has 'much To Say'

Gogoi, the 46th CJI is the son of former Assam CM Kesab Chandra Gogoi. In his tenure lasting a little over 13 months, Gogoi delivered key judgments in cases such as the Ayodhya land dispute, the Rafale deal, contempt case against former Congress president Rahul Gandhi and Sabarimala review verdict. After his retirement on November 17, 2019. Justice Sharad Arvind Bobde succeeded him as the next CJI. Gogoi's nomination to the Rajya Sabha fills the vacancy caused due to the retirement of senior advocate KTS Tulsi, a nominated member.

As a nominated member, he will enjoy all the powers, privileges and immunities available to fellow parliamentarians, but will not be able to vote in the election of the President. Moreover, he has 6 months to decide whether he wants to join a political party. Gogoi is likely to take oath as a Rajya Sabha member on Thursday.