Amid the Coronavirus (Covid-19) breakout, in which 8 cases have been confirmed in India so far, the Government has issued an advisory related to the virus

Amid the Coronavirus (Covid-19) breakout, in which 8 cases have been confirmed in India so far, the Government has issued an advisory related to the virus. In the advisory dated March 3, 2020, the Ministry of Health and Family Welfare has suspended all regular visas granted to nationals of Italy, Iran, South Korea and Japan issued on or before March 3, with immediate effect. Visas granted to foreign nationals who have travelled to China, Iran, Italy, South Korea and Japan on or after February 2 and have not entered India yet have also been suspended.

Diplomats, officials of UN to be exempted from restrictions

Diplomats, officials of UN and other international bodies have been exempted from any restriction, however, their medical screening is compulsory. As per the advisory issued, passengers of all international flights entering India are also required to furnish a duly filled self-declaration stating their personal information and travel history. Meanwhile, Indian citizens are advised to refrain from travelling to China, Iran, the Republic of Korea and Italy and other Covid-19 affected areas. Here is the full advisory: 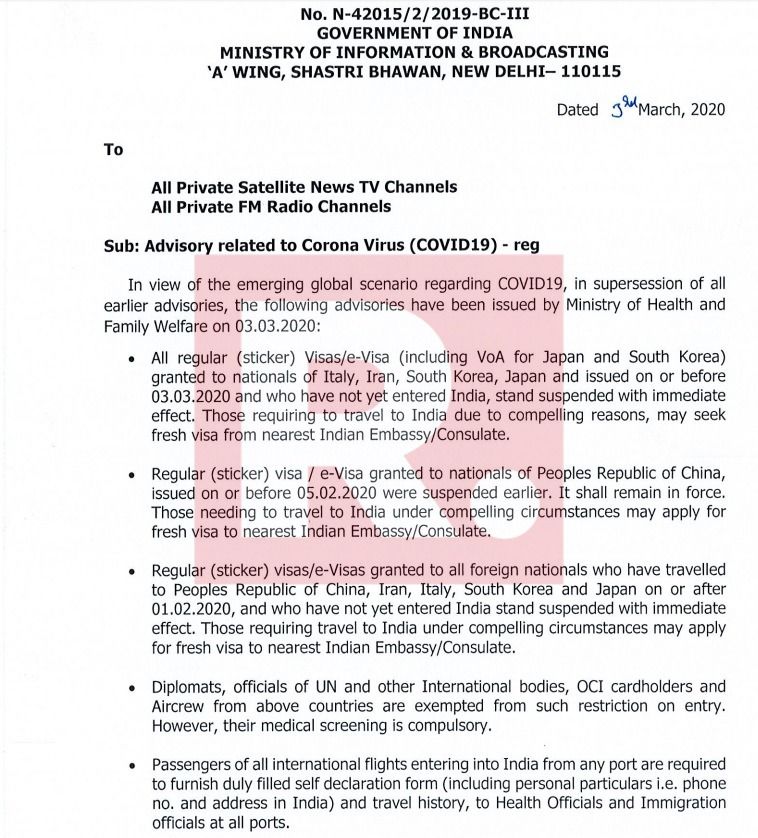 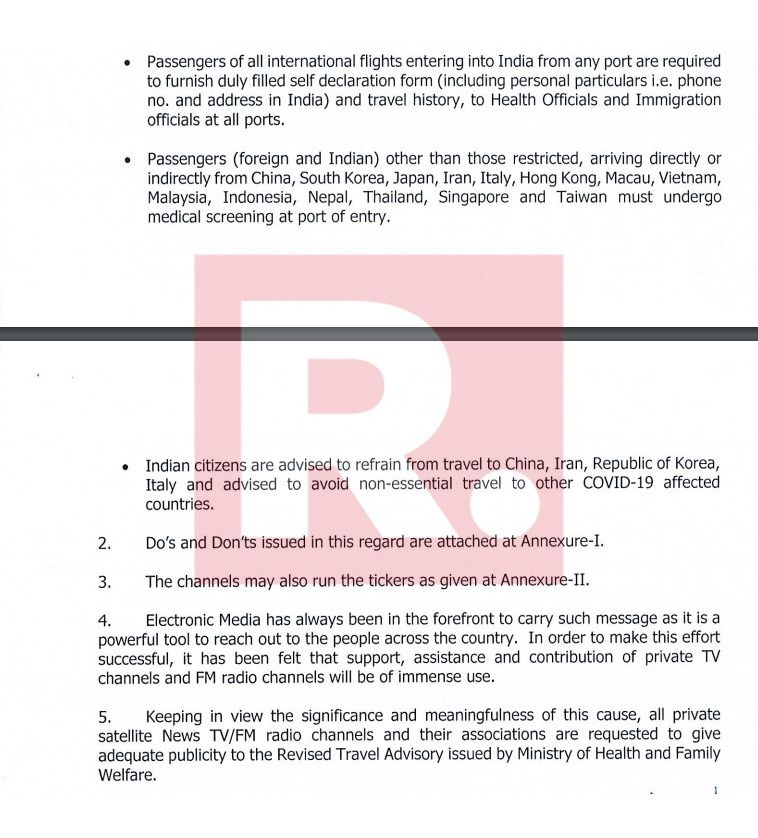 Earlier in the day, Prime Minister Narendra Modi on Tuesday held an extensive review meeting regarding preparedness. Taking to the microblogging site, PM Modi said that there is no need to panic. He also mentioned that different ministries and states are working together to provide prompt medical attention.

India had earlier reported three cases from Kerala, including two medical students from Wuhan in China, the epicentre of the deadly novel coronavirus. They had self-reported on their return to the country and tested positive for the infection. They were discharged from hospitals last month following recovery. The fatal pathogen has now spread to over 60 countries with more than 90,000 confirmed cases and has claimed more than 3,000 lives worldwide.

United Nations has released $15 million from the Central Emergency Response Fund (CERF) to help fund global efforts to contain the novel coronavirus COVID-19. UN Humanitarian Chief Mark Lowcock announced the release of the fund after the World Health Organisation (WHO) raised the alert to its top level of risk assessment - ‘very high’.

The UN funding has been released for the WHO and the UNICEF to help essential activities including monitoring the spread of the virus, investigating cases, and the operation of national laboratories. The WHO has called for $675 million in funding to combat the deadly virus. WHO Director-General said that the biggest concern is the countries with weaker health systems.

PEOPLE HAVE PLEDGED SO FAR
From Mumbai to Hyderabad: Here is the list of containment zones in some parts of India
Lockdown: Post office staff to hand over pensions to beneficiaries in HP's Kangra
Coronavirus: SC asks Centre, J&K to reply on plea for restoration of 4G services
DGCA issues guidelines for aircraft storage and their return to service
COVID-19: Home Secretary dials Maharashtra & UP Chief Secretaries to review situation
DO NOT MISS
5 MEN ARRESTED FOR BEATING ENGINEER
COVID-19: DOCTORS WRITE TO MHA
ODISHA EXTENDS LOCKDOWN TO APRIL 30
DELHI CM ON OPERATION SHIELD
MADAN LAL REJECTS INDIA-PAK SERIES
PRASOON JOSHI ON 'MASAKALI 2.0' ROW