In yet another major action against Jammu and Kashmir Police DySP for helping terrorists, the Jammu and Kashmir Government has forfeited his gallantry award. He was awarded for the conduct of his professional duties during a fidayeen attack on District Police Lines, Pulwama on August 25-26,  2017. He was at that time posted as DySP District Police Lines, Pulwama.

In an official order title “Forfeiture of Sher-e-Kashmir Police Medal for Gallantry awarded to Mr. Davinder Singh, Dy.SP-reg.” issued late night, Jammu and Kashmir Home Department has taken back the gallantry award of DySP Davinder Singh. “Consequent upon the arrest of Mr. Davinder Singh on 11.1.2020 while trying to assist terrorists to travel outside J&K and recovery of arms and ammunition in the case FIR No. 05/2020 us 07/25 A. Act ¾ ES Act, 18,19,20,30 & 39 of ULA (P) Act, P/S Qazigund, which amounts to disloyalty and conduct that has bought the force into disrepute, the Sher E Kashmir Police Medal for Gallantry, awarded to him vide Government Order No. Home-1050 of 2018 dated 14.08.2018, is hereby forfeited. ” 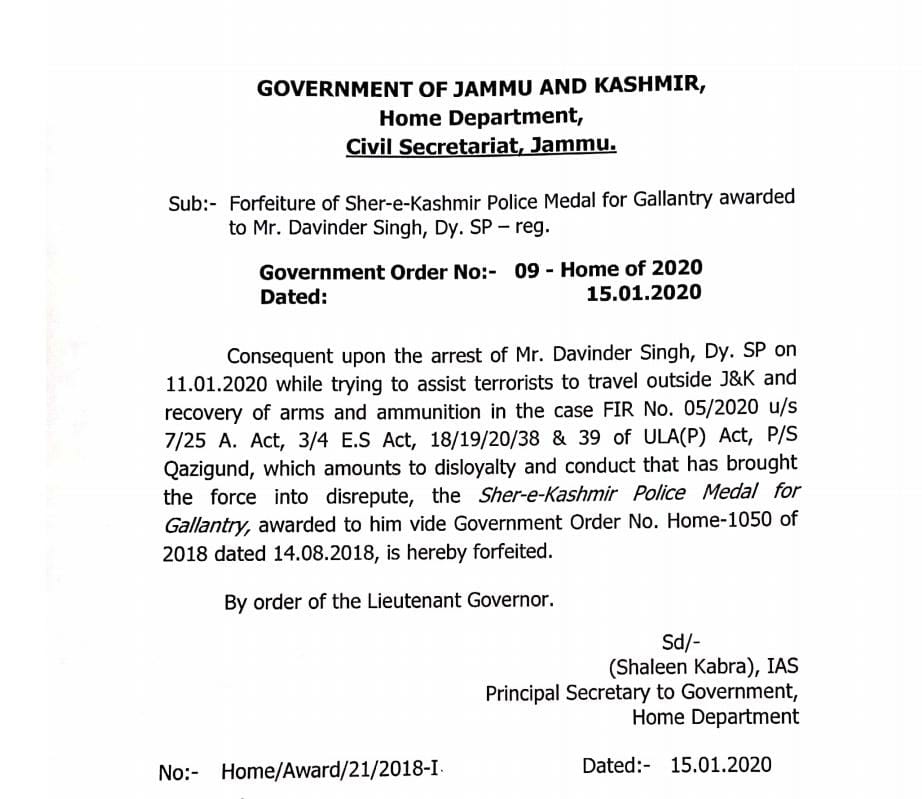 The Jammu and Kashmir Police has also recommended the National Investigation Agency (NIA) probe in the case. Replying to Republic’s question, DGP Dilbag Singh said, “We have already recommended for NIA probe into the matter as things of wider magnitude may come out.’’

The Police Chief has also said that he has recommended for termination of DySP Singh from service. Davinder Singh was posted with the J&K Police anti-hijacking unit at Srinagar airport and was on leave when he was arrested with top Hizbul Mujahideen commander Naveed Babu, and his associates, at a checkpoint on the Srinagar-Jammu National Highway on January 11. The operation was led by DIG South Kashmir Atul Goel. The Police after his arrest made recovery of arms and ammunition from his residence in Srinagar.