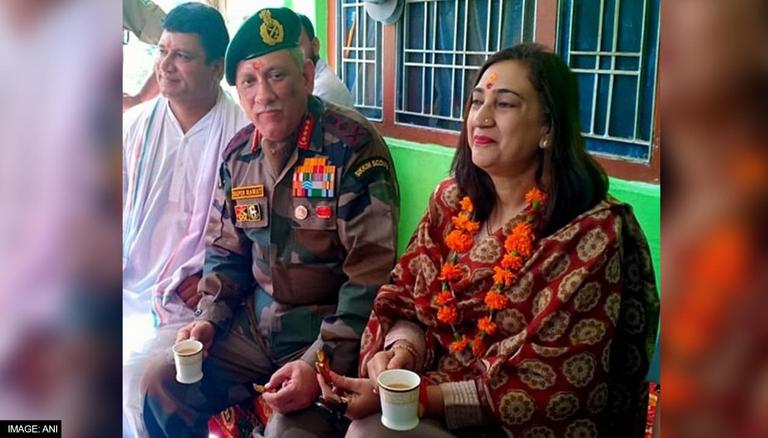 
As the Nation on Friday, 10 December, bid a tearful goodbye to India's first Chief of Defence Staff (CDS) General Bipin Rawat and his wife Madhulika Rawat, her brother has recalled the events that led to their marriage 35 years ago. Yash Vardhan Singh, the brother of Madhulika, has revealed that fate had brought the couple together and it took them away at the same time. CDS Bipin Rawat and his wife lost their lives in a tragic IAF chopper crash that happened near Coonoor, Tamil Nadu on Wednesday, 8 December.

Yash Vardhan Singh has informed that the couple met after CDS General Bipin Rawat's father, Laxman Singh Rawat, who was also an army officer asked for Madhulika's hand for his son. Bipin Rawat and Madhulika belonged to two different states as the former hailed from Uttarakhand (then UP) while his wife came from Sohagpur in Shahdol district in Madhya Pradesh. Remembering his sister, Yash Vardhan Singh mentioned that their maternal grandfather lived in Lucknow and his sister was born there in 1969.

''It was actually his father (Laxman Singh Rawat), who was also an army officer, who had sought the hand of my sister for his son (Bipin Rawat). He wrote to my father late Mrigendra Singh and that's how the marriage talks began,'' Yash Vardhan Singh said as per PTI.

He told PTI that the address of Madhulika's place of birth was "25, Ashoka Marg" while the place she got married in Delhi was "25 Ashoka Road" and he called it a "pleasant coincidence". Yash Vardhan Singh recalled the marriage of General Rawat and Madhulika that took place 35 years ago in 1986. He stated that he has so many memories about the wedding and now his sister and brother-in-law are no more. Yash Vardhan Singh's daughter Bandhvi Singh, a national-level shooter, was present at the official residence of the CDS to pay last respects to General Rawat and his wife.

''The year was 1986. And, Gen Rawat then held the rank of a Captain, and was posted in Dehradun. Such fond memories, and now cruel fate has snatched my sister, and my brother-in-law from us,'' Yash Vardhan Singh said as per PTI.

Bandhvi Singh remembered the time she spent with General Rawat at his official residence a few months before, as per PTI. Bandhvi recalled that she had returned from Peru after participating in a world shooting championship. She mentioned that it was a time of Dussehra and the late General took her to see the festivities by the Gorkha Regiment soldiers. She told PTI, “As I shoot rifle as a sport, he wanted me to get blessings of the Goddess,” and added that she will "cherish" these memories now.

General Rawat and his wife laid to rest

CDS Bipin Rawat and Madhulika were laid to rest at the Brar Square crematorium in Delhi Cantonment with full military honours, two days after they and 11 other defence personnel were killed in a chopper crash near Coonoor. The couple's daughters performed the last rites and paid an emotional tribute to their parents. Defence Minister Rajnath Singh, Chief Ministers Pushkar Singh Dhami and Arvind Kejriwal also attended the funeral and paid tribute to CDS Rawat.