In reply to an RTI query, NCERT said it has no evidence on the excerpts in history textbook which state that Mughal emperors had rebuilt the destroyed temples.

In a reply to an RTI query, the National Council of Educational Research and Training (NCERT) has stated that it has no evidence on the excerpts in history textbooks which state that Mughal emperors had rebuilt the destroyed temples.

Page 234 of the class 12 NCERT textbook titled 'Themes of Indian History (Part 2)' says, "All Mughal Emperors gave grants to support the maintenance of places of worship. Even when temples were destroyed during the wars, grants were later issued for their repairs - as we know from the reigns of Shah Jahan and Aurangzeb."

Page 234 of the NCERT textbook 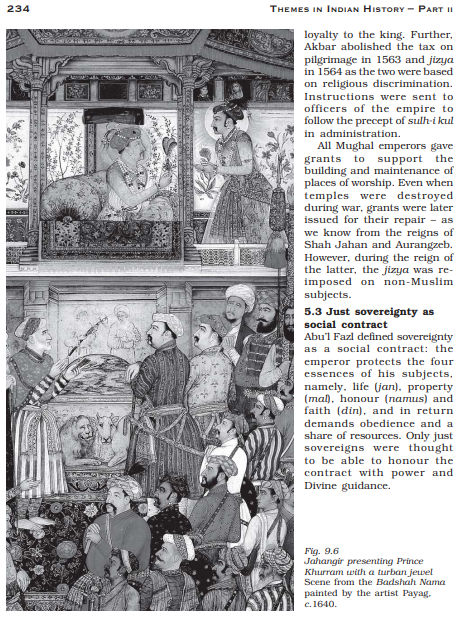 The RTI query was filed by Shivank Verma who sought the source from which NCERT arrived at the conclusion that the Mughal Emperors rebuilt the temples destroyed in wars. The RTI application also asked to provide the number of temples that were repaired by Aurangzeb and Shah Jahan.

In response to both the questions raised by Shivank Verma, the NCERT said that it has nothing to corroborate the claim as this information is not available on the files of the department.

With the revelations of the distortions in the NCERT textbook, various organisations have now been invited to depose on textbook reforms and suggest the removal of distorted information.

READ | Army Day 2021: Everything You Need To Know About Army Day, From History To Significance

'History was changed and people misguide'

Speaking on the revelation, BJP leader Dr. Nirmal Singh has said, "The claims of Mughal Emperors rebuilding temples after destruction is a figment of the imagination of the psuedo secular historians or the historians having affiliation with the Leftists or the Congress. Because there is no such evidence."

"The claim that temples were destroyed during wars is wrong. It was a part of the Jihadi mindset of converting India into Islam," he added.

Reacting to the RTI revelation, former Deputy CM of Jammu and Kashmir Kavinder Gupta said, "One thing is obvious, that there has been a conspiracy in the history which has been taught to us since independence. History was changed and people have been misguided."