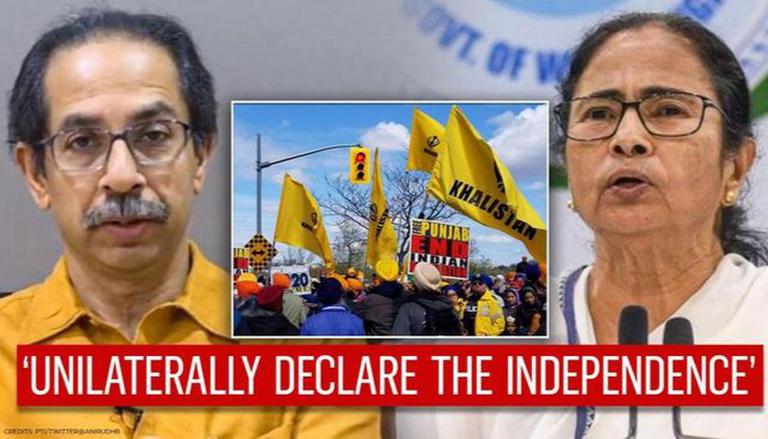 In a bizarre & brazen move, pro-Khalistan radical outfit Sikhs for Justice (SFJ) has asked West Bengal CM Mamata Banerjee and Maharashtra CM Uddhav Thackeray to 'unilaterally declare independence' from India. After numerous attempts to hijack the ongoing farmers' protests to push their Khalistan agenda, SFJ has now written a letter to the leaders of the two Indian states asking them to declare independence from the Union of India citing exploitation of their resources. In a letter addressed to CM Mamata Banerjee and CM Uddhav Thackeray, SFJ called for the separation of the two states from India in order to 'safeguard the prosperity, ethnicity, identity, language, and culture of the Bengali and Marathi peoples from the Indian hegemony which denies diversity and imposes a historical homogeny'.

The radical terror outfit claimed that the resources of West Bengal and Maharashtra were plundered by the Government of India since 1947. Explaining the brazen idea, SFJ in its letter claimed that the elected legislative bodies in both states had the power to pass a Unilateral Declaration of Independence to secede from the Union of India. Further, SFJ said that when done so, it will be well within the established norms (Jus Cogens) of international law as upheld by the International Court of Justice (ICJ) in the case of Independence of Kosovo.

Further, the terror outfit claimed that the 'ethnicity, language, culture, and identity of the indigenous people of West Bengal and Maharashtra is under increasing existential threat from the discriminatory policies of New Delhi'. SFJ also offered its legal service to Maharashtra and West Bengal to defend the 'Unilateral Declaration of Independence by West Bengal and Maharashtra' at the International Court of Justice (ICJ) while boasting about successfully pleading Kosovo's case.

The crackdown on the pro-Khalistan radical outfit Sikhs for Justice (SFJ) intensified as the Government of India banned the outfit's website just four days after it was launched. The SFJ website claiming to provide a platform for the Khalistan referendum was banned on the orders of the Department of Telecommunications. The website, which was launched by the pro-Khalistani outfit on February 10, 2021, asked the farmers to register to earn $21,000 annually while extending their support for the Khalistan referendum.

Sikhs For Justice (SFJ) has been actively involved in hijacking the ongoing farmers' protests and has organised protests outside Indian Missions in the US, Canada, UK, and Europe to 'stand in solidarity' with the protesting farmers of Punjab, as stated by the Centre in the Supreme Court. The radical outfit wrote to EAM S Jaishankar and MoS Muraleedharan declaring their support for the Bharat Bandh called on December 8 and alleged that the Indian government was 'unabashedly suppressing and gagging the protesting, criticizing and dissenting voices, with impunity'. Earlier, the SFJ also offered $1 million to farmers who were injured or whose tractors were damaged in the farmers' protests.