In a letter written by NSA Ajit Doval, it has been said that the manner in which the UP government handled the entire matter after the verdict is commendable

Almost a month after the Ayodhya case verdict by the Supreme Court which ended the decades-old land dispute, the Narendra Modi-led government at the Centre has written a letter to the Yogi Government of Uttar Pradesh. The central government has commended the Yogi Adityanath-led BJP government for maintaining control over the situation after the verdict on the Ayodhya case. In a letter written by the country's National Security Advisor Ajit Doval, it has been said that the manner in which the Uttar Pradesh government handled the entire matter after the verdict is commendable. Ajit Doval wrote this letter to Uttar Pradesh Chief Secretary RK Tiwari. 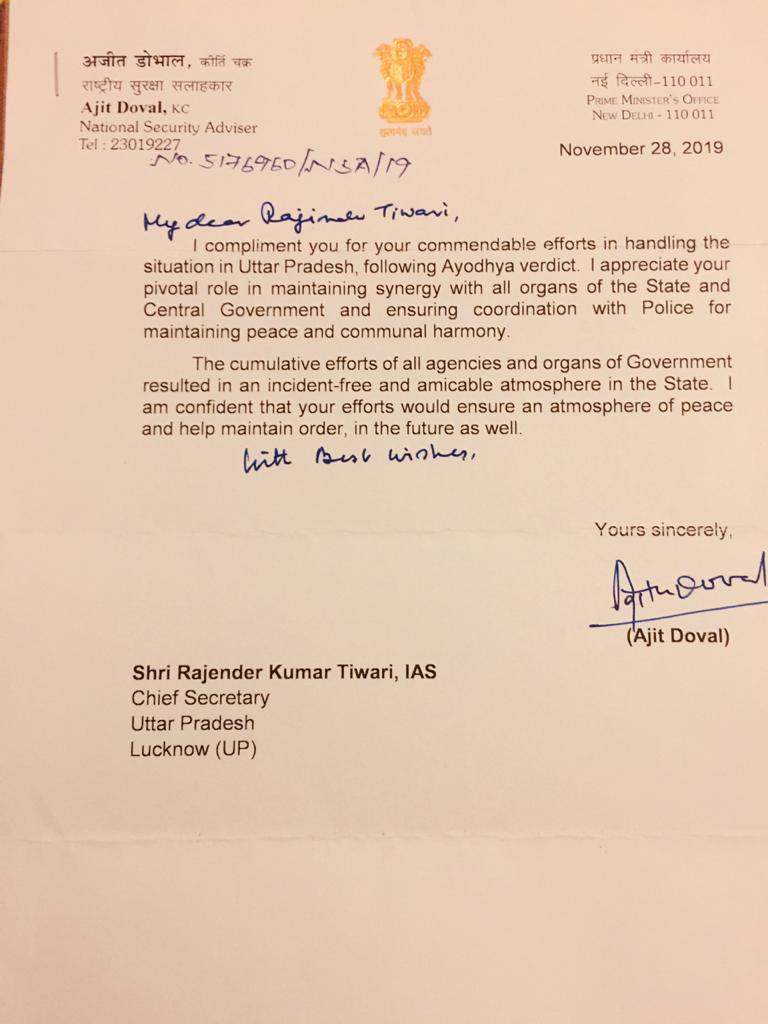 A month after in the Ayodhya case verdict by the Supreme Court now, 40 academics and activists have filed a review petition through advocate Prashant Bhushan. The petitioners include -- Irfan Habib, Harsh Mander, Farah Naqvi, Nandini Sundar, Shabnam Hashmi, John Dayal, and Jayati Ghosh. Six more litigants are set to file review petitions against the Supreme court verdict in the Ayodhya case, an AIMPLB office-bearer said on December 5 in Lucknow. The Jamiat Ulema-e-Hind has already filed a review petition.

A week after the Supreme Court's verdict, the Centre on November 11, reportedly initiated the process of constituting the trust, that will construct and run the Ram temple in Ayodhya. The Home Ministry officials are sorting out the technicalities to ensure the implementation of the top court's order. The Central government is likely to consult legal experts for finalising the structure of the trust. This process has to be completed within the deadline of three months as mandated by the Supreme Court.

Pronouncing the landmark judgment in the Ayodhya dispute case on November 9, the Supreme Court, delivered a unanimous judgment in the title suit of the disputed area awarding it to the Hindu parties for the construction of a temple. It also directed the Centre to come up with a scheme within three months to set up a trust which will hand over the outer courtyard and inner courtyard of the site for construction of a temple. Apart from this, the SC stated that an alternate land of 5 acres is to be allotted to Muslims for the liberty of constructing a mosque, either by the Central or the state government in a suitable and prominent place in Ayodhya. CJI Ranjan Gogoi, while delivering the unanimous judgment, dismissed the claims of the Sunni Central Waqf Board and the Nirmohi Akhara. He also termed that the three-way division of the disputed land by the Allahabad HC in its 2010 verdict is wrong.

PEOPLE HAVE PLEDGED SO FAR
Ahead of Parl's Budget Session, LS speaker, RS chairman to meet leaders of political parties
Mamata Banerjee launches her book on CAA, NRC & NPR
Four criminals, cop injured in shootout in Greater Noida
We have changed tactics, bettered drills post Pulwama attack: CRPF DG
SHOCKING: Now, video of man brandishing pistol at Shaheen Bagh emerges
DO NOT MISS
AJIT PAWAR TAKES A VEILED DIG
INDIA DEFEATS AUS IN U19 WC
YOGI: I AM NOT ANTI-MUSLIM
AYUSHMANN ADMITS TO SLIP IN COMMENT
WHY 2020 BUDGET IS THE TOUGHEST ONE
LIFE INSURANCE FOR NRI IN INDIA