Denying the money trail between the Popular Front of India (PFI) and the anti-CAA protests in Uttar Pradesh issued a statement condemning any such reports.

Denying the money trail between the Popular Front of India (PFI) and the anti-CAA protests in Uttar Pradesh, the party's General Secretary Mohammed Ali Jinnah, on Monday issued a statement condemning any such reports. Furthermore, he stated that the PFI complied with the law of the land and challenged the 'unnamed sources' of Enforcement Directorate (ED) to prove their allegations. Explaining the money transfer from PFI accounts to prominent lawyers, he claimed that the payment was related to 2017 Hadiya Case and not funding for the 2019 CAA protest.

" Popular Front of India strongly condemns the news reports that are published in various news channels regarding Popular Front’s financial link to instigate the CAA protest. Popular Front of India had stated it multiple times that we fully comply with the law of the land and the allegation of Rs.120Cr transferred from the Popular Front’s accounts just before the CAA protest is totally baseless and the people who are leveling these allegations should prove these claims. The truth is that transfers were made in 2017 as a lawyer fees for these advocates for the Hadiya Case," stated the press release.

Here is the statement: 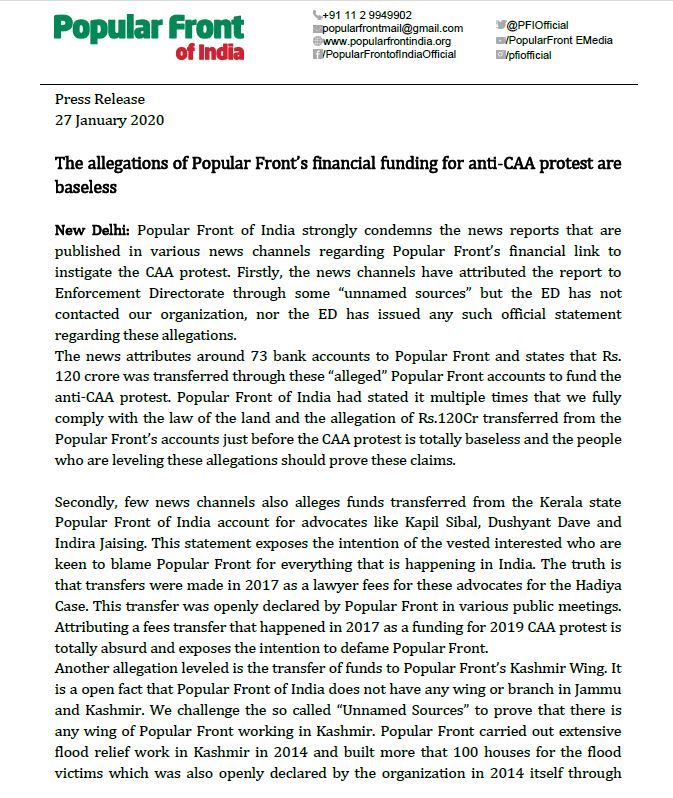 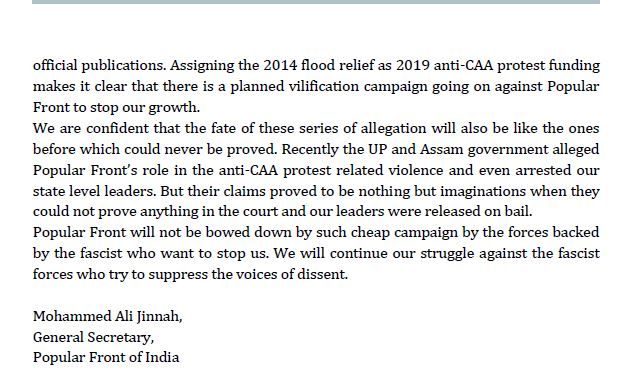 Earlier in the day, the Enforcement Directorate (ED) has unearthed a direct link between anti-CAA protests in Uttar Pradesh and the Popular Front of India (PFI) - sending a note stating the same to the Home Ministry. Moreover, the ED has found a link between Rs. 120 crores deposited in 73 bank accounts allegedly belonging to PFI from various sources and the anti-CAA protests held in Uttar Pradesh, as per sources. 90 withdrawals were allegedly made in a day during the protests against the CAA, as per the bank documents and proof procured by the ED.

PFI and SDPI under police scanner

The UP police has blamed the PFI and SDPI for the violence that erupted in the state during the protest against the CAA.  On December 31, DGP OP Singh formally wrote to the Ministry of Home Affairs seeking a ban on the PFI. UP CM Yogi Adityanath too has challenged the  Congress, SP, and BSP in a recent rally, to reveal their connection with SIMI and PFI alleging PFI's support to 'anti-social' elements. Violence has been witnessed in Uttar Pradesh for the past weeks against the amended Citizenship Act which has led to the 21 deaths and many injured.

PEOPLE HAVE PLEDGED SO FAR
On Maha Shivratri, Odisha artist creates miniature of 'Shiva Linga' on pencil nib
Rain in Punjab, more likely on Friday
President Donald Trump might give a miss to Gandhi Ashram in Ahmedabad: Sources
SC issues notice to Centre on fresh pleas against CAA, tags them with pending ones for hearing
Mediators to continue talks with Shaheen Bagh protesters 'in a more organised manner'
DO NOT MISS
MNS THREATENS WARIS PATHAN
MEA: ABRAHAMS SENT BACK 'IZZAT SE'
ACTIVIST HECKLED OUT OF RALLY
BJP TAKES AIM AT SHIV SENA
WHOSE BOWLING ACTION BEST?
ZUCKERBERG GETS ARMPITS BLOW-DRIED