PM Narendra Modi shocked his followers by hinting that he may quit social media platforms. Netizens asked him to reconsider his decision, saying, 'No sir'.

Prime Minister Narendra Modi shocked his followers on Monday by hinting that he is planning to quit social media. While discussions on the reason for his cryptic tweet started, many of his 53.3 million followers on Twitter were worried. Several followers urged PM Modi to reconsider his decision, after which ‘No Sir’and ‘Please Don’t’ immediately started trending on the microblogging.

Users wrote how his followers will also quit the mediums if he quits since many were on it only for him. One felt the PM’s handle was the best way to know what is going on in the nation.

A netizen wrote how people will miss his ‘inspiring, educating n informative’ tweets. Another shared how they felt a ‘direct’ connect with the Prime Minister via his tweets, and him leaving them ‘alone’ won’t please them. 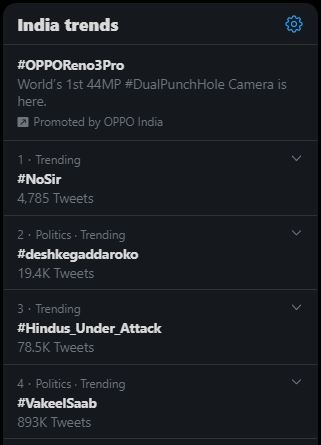 One very innocently and interestingly wrote that quitting the medium will make him susceptible to ‘manipulated facts from secondary sources’ and how it will disconnect him from the real sentiments of the nation.

Here are the responses:

No sir. Please don’t leave us. This is where we can get to know the current situation of the nation. pic.twitter.com/fL1cJBhEy1

😭😭 no sir. plzzzzzzzzzzzzzzzzz
your followers will also start leaving from everywhere https://t.co/bOKswa4OAF

No sir please
You are the only reason why many are here sir. ☹️ https://t.co/sFGxMDtnrp

No Sir, you must not do so. Your tweets are inspiring, educating n informative https://t.co/OzoLoo15ht

Oh no sir
We feel u around when u r at social media.
This is the direct approach to u sir.
Pls dont leave us alone https://t.co/CJy5Mx8s4O

Sir you are our inspire so dont leaving us in social media please please https://t.co/HltpHIlSkc

Please dont take this step, it will disconnect you from real sentiments of nations and you may get manipulated facts from secondary sources.This will increase lobying...!!

Please dont do this sir... https://t.co/tftCNwXem3