Prasar Bharati CEO Shashi Shekhar Vempati has declined an offer by BBC to attend one of its shows and slammed it for its "one-sided" coverage of Delhi riots.

Prasar Bharati CEO Shashi Shekhar Vempati has declined an offer by British national broadcaster BBC to attend one of their events, citing "one-sided" coverage of communal violence in the national capital. In a letter written to Tony Hall, the Director-General of the BBC, Shashi Shekhar Vempati has declined the invitation to attend the BBC Indian Sportswoman of the Year Awards Night. This is the first such award ceremony hosted by the BBC.

'I must respectfully decline the invitation...'

In his letter, Vempati cited a report of the BBC by Yogita Limaye from March 3, 2020, and said that ground reports of the Delhi riots by the British broadcaster were “damningly silent” on the “murderous assault” on the men in uniform by a mob that resulted in death of a Head Constable while in the line of the duty and also resulted in the fatal injuries to received by a Deputy Commissioner of Police (DCP). 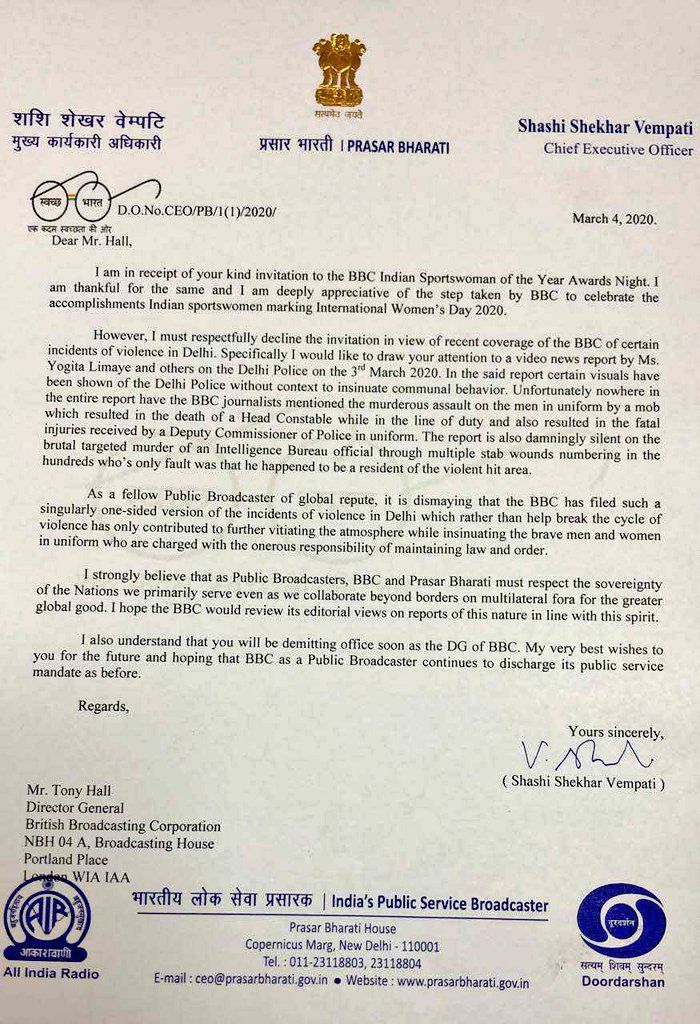 'I hope the BBC would review its editorial views'

Conveying his refusal to attend the event, the Prasar Bharti CEO said, “It was dismaying that the BBC has filed such a one-sided version of the incidents of violence in Delhi which rather than help break the cycle of violence has only contributed to further vitiating the atmosphere while insinuating the brave men and women in uniform who are charged with the onerous responsibility of maintaining law and order.”

He asked the BBC to “respect the sovereignty of nations” and urged it to work together with the Indian broadcaster in the greater public interest.  He also added that he hopes the BBC would review its editorial views on reports of such nature.

Last week, A police complaint was filed with the Delhi Police as well as the Maharashtra Police against American publication Wall Street Journal (WSJ) for "defaming a particular religion and spreading communal tension" by "misreporting" on the Delhi riots and the killing of IB staffer Ankit Sharma.

The complaint was filed over a news item published in the WSJ on February 26 which reported that Sharma's killers shouted 'Jai Shri Ram', quoting the IB staffer's brother Ankur Sharma, who, however, denied making such a statement to the American media outlet.