West Bengal government has formed five teams for support surveillance and monitoring the treatment protocol at five hospitals across the city.

The West Bengal government has formed five teams to support the surveillance and for monitoring the Covid-19 treatment protocol at five hospitals across the city. The teams will start working from May 11 onwards.

READ: West Bengal Governor Slams Mamata Banerjee; Urges The CM To Be On A 'sane Path' 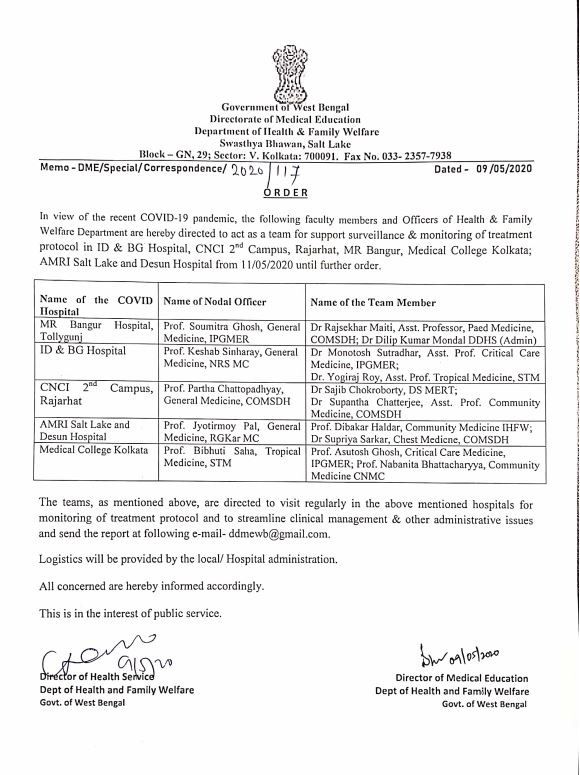 The officers are from the Office of Health and Family Welfare Department and will be covering MR Bangur hospital, ID and BG hospital, CNCI 2nd campus, AMRI Salt Lake and Desun hospital, and Medical college in Kolkata.

On Thursday, MHA Home Secretary Ajay Bhalla wrote to the Mamata-led government directing it to not block the movement of trucks across Bangladesh border after reports came on May 2 that trucks carrying essential goods were not allowed to move to Benapole, located on the other side of the border at Petrapol.

Responding to it, the ruling Trinamool Congress (TMC) denied charges levelled by Union Home Secretary and accused him of "trying to please his political bosses in Delhi".

On Saturday, the Health Ministry announced that it will be sending Central teams to 10 COVID-19 hit States, which are witnessing high case-load and surge in numbers. The Central teams will be sent to states including Gujarat, Tamil Nadu, Uttar Pradesh, Delhi, Rajasthan, Madhya Pradesh, Punjab, West Bengal, Andhra Pradesh, and Telangana.

"The teams will assist the state health departments in facilitating the management of the COVID-19 outbreak," said a ministry statement. As per the statement, the teams will comprise a senior Health Ministry official, a Joint Secretary level nodal officer, and a public health expert. The teams will support the state health departments in the implementation of containment measures in the affected areas, districts and cities. The 10 teams which will be sent will be in addition to 20 central teams that had already been sent to the high caseload districts.