KErala's six LDF leaders including Education Minister V Sivankutty have now approached the HC seeking a stay in the trial of the 2015 assembly violence case. 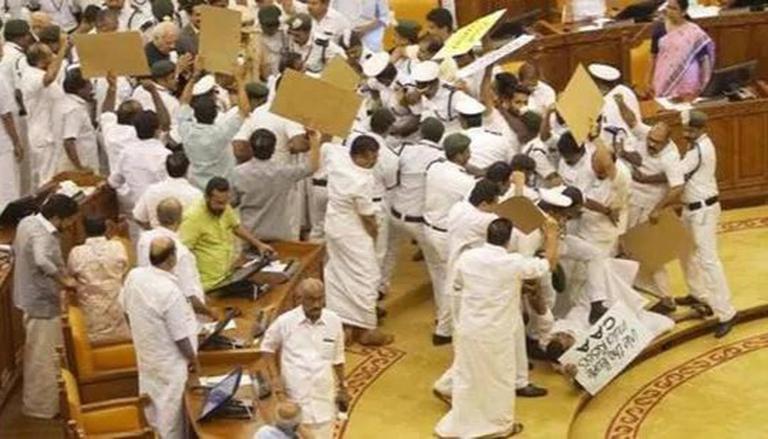 
Kerala Education Minister V Sivankutty along with five other leaders under the Pinarayi Vijayan government on Monday approached Kerala High Court seeking a stay in the trial of the 2015 Assembly ruckus case. The minister filed a petition challenging the Thiruvananthapuram Chief Judicial Magistrate Court order, which rejected their discharge petition in the case in which elected representatives of the LDF created ruckus in the State Legislative Assembly in 2015 when the LDF was in opposition.

The then Opposition MLAs had then barged into the Speakers podium and caused chaos in the assembly in an attempt to stop then Kerala Finance Minister KM Mani of the UDF government from giving his budget speech, alleging that he had taken a bribe for granting bar licences. The petition filed by the accused leaders read, “The lower court has erred in failing to consider or apply the various binding precedents relied on by the petitioners while defending the plea for discharge. There is no material available on record on the basis of which the Magistrate could reasonably come to the conclusion that the petitioners had any intent to protest against the Assembly proceedings. More than 130 MLAs were present in the Legislative Assembly Hall and none of them complained about the incident.”

“A case was registered against the petitioners with an ulterior motive and malafide intentions on the basis of a letter of the Secretary of the Legislative Assembly. The petitioners were totally innocent of the allegations levelled, and that the finding of the final report filed by the Deputy Police Superintendent are not supported by any legal evidence. The Speaker of the Assembly, who is the competent authority to take action in such cases, had not made any complaint in this regard, and that in the absence of the same, the criminal proceedings cannot stand,” the petition stated as cited by ANI.

During the reign of the UDF-led government in 2015, there were violent scenes in the state assembly caused by the then Opposition. The MLAs tried to disrupt the annual budget speech of then Finance Minister KM Mani on March 13. Social Activist MT Thomas and Peter Mayilparambil filed a petition after the incident in which MLAs destroyed public property in the Legislative assembly. The LDF members had blocked all entrance to the House including that of the Speaker's dais as they demanded 'tainted minister' who was then facing a bribery charge should read the budget. Senior LDF members sat on the podium and raised protest-slogans and had a major scuffle with the watch-and ward staff when they tried to evict the protesting MLAs from the podium. Leaders including K Kunjahmed, E P Jayarajan, James Mathew, T V Rajesh and V Sivankutty went on a rampage in the assembly and damaged the speaker's chair, loudspeakers, computers and lights.

WE RECOMMEND
ATK Mohun Bagan vs Kerala Blasters live stream: When and where to watch ISL 2021 opener