Amid continuous demands for the release of former CM and PDP chief Mehbooba Mufti, Centre has shifted her to her residence and said that her detention continues

The J&K administration has on Tuesday shifted former Chief Minister of Jammu and Kashmir and PDP chief Mehbooba Mufti, to her own residence but has said that her detention under PSA will continue. This comes amid continuous demands for her release and after the release of NC leader and ex-CM Omar Abdullah. On February 6, the Jammu and Kashmir administration had slapped the stringent PSA against Mufti and Omar, reportedly a day before their detention was supposed to end. Political leaders of J&K were placed under preventive detention ahead of the abrogation of Article 370 last year. 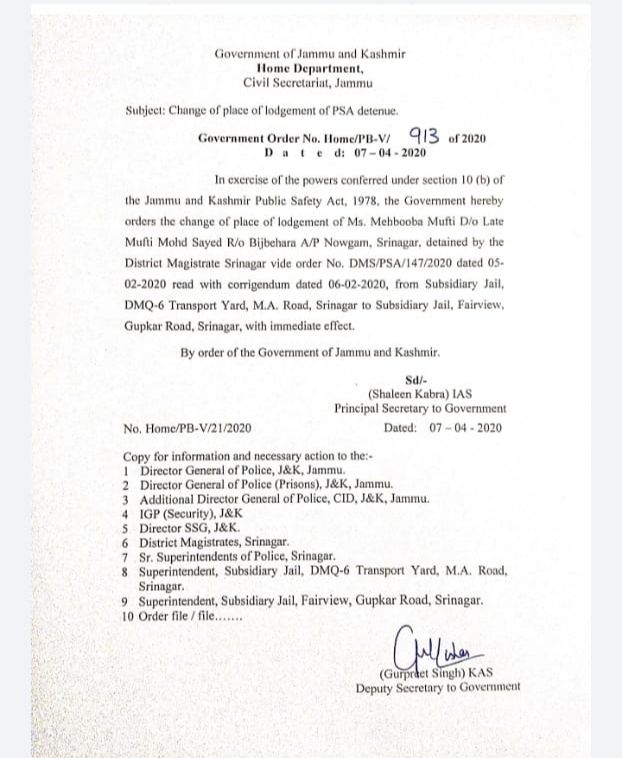 Last month the government also released both National Conference chief Farooq Abdullah and his son Omar Abdullah. As Omar was released he demanded the release of PDP chief Mufti. Earlier, taking a dig at the present 'regime' after Omar's release, Mufti had alleged that they feared the women the most. "Glad he will be released. For all their talk of Nari Shakti & women emancipation, it seems like this regime fears women the most," she said.

'In all COVID-19 news', Omar Abdullah points out Mehbooba Mufti's 8 months of detention

In a big development after the abrogation of Article 370 that defined the permanent residents of the erstwhile state of J&K, the Gazette of India order issued on April 1 redefined domiciles for the UT J&K. Section 3A of the J&K Reorganisation (Adaptation of State Laws) Order 2020, under the J&K civil services (decentralisation and recruitment) Act, states that a domicile of J&K is one 'who has resided for 15 years in J&K, or has studied for 7 years and appeared in Class 10/12 exam in J&K, or is registered as migrant by the Relief and Rehabilitation Commissioner.'