A high alert has been sounded in Maharastra's Raigad district after a boat bearing rifles was found on the beach of Harihareshwar on Thursday, August 18. A search operation has been launched by the police. 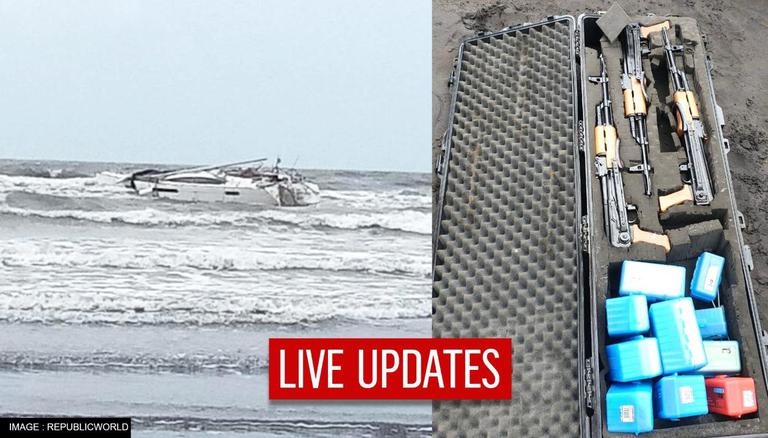 Republic TV is reporting LIVE from Raigad where a boat containing explosives was seized. Security has been beefed up. 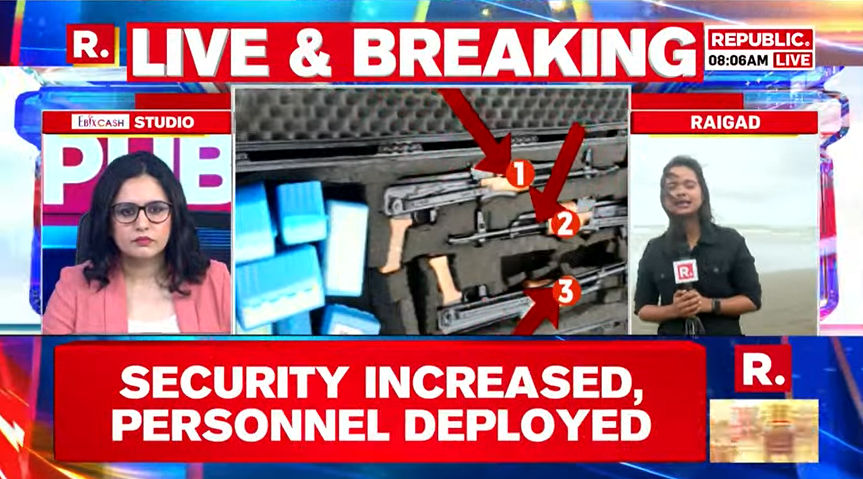 A day after a suspicious boat loaded with weapons was recovered from the Harihareshwar beach, the Maharashtra Anti-Terrorism Squad (ATS) swung into action and pulled the vessel away from the Raigad coast for further investigation. ATS Chief Vineet Agrawal said, "A boat with three AK-47 rifles was seized off Raigad coast today. The investigation is underway. We've retrieved some papers from the boat, more things are lying inside the boat. We are trying to pull the boat away from the sea."

Morning visuals of a seashore in Raigad district where a suspicious boat with three AK-47 rifles was seized, yesterday.

Maharashtra | Morning visuals of a seashore in Raigad district where a suspicious boat with three AK-47 rifles was seized, yesterday pic.twitter.com/tg3i1hqNXQ

Security personnel deployed on a beach in Raigad district where a suspicious boat with three AK-47 rifles was seized yesterday.

Maharashtra | Security personnel deployed on a beach in Raigad district where a suspicious boat with three AK-47 rifles was seized yesterday pic.twitter.com/ifyY3jSrZK

An eyewitness speaking to Republic Media Network said, "We noticed the boat at 7 am today. The boat was around 2-3 kilometres inside the water. We found a black box inside the boat and informed the police. When police opened the box, three AK-47 guns, bullets and other things were found."

Another eyewitness said, "From the first look, the boat looked suspicious as fishermen don't use this type of boat. Our statement has not been recorded by the police yet. They are doing their job."

#LIVE: Republic reports from the site of the boat bearing AK-47s that has come to be beached at Raigad. Tune in to watch here - https://t.co/HibEqEDGoE pic.twitter.com/6GsjoFXOsg

"A boat with a few weapons was seized off Raigad coast today, near the Harihareshwar area. Maharashtra ATS will be on it. The boat is secured as of now. To rule out the terror angle or not will be decided later" said Sanjay Mohite, Inspector General of Police, Konkan Range.

The name of the vessel found at Raigad beach is Lady Han and it is owned by Hana Lordorgan, an Australian woman.

The woman's husband James Hobert was the captain of the vessel which was going to Europe from Muscat, Maharashtra Deputy Chief Minister Devendra Fadnavis said in a statement.

After it came to light that the unmanned boats found in Maharashtra's Raigad belonged to Neptune Maritime Security, Republic accessed exclusive details of the vessel that set sail from Dubai on June 22. Sources told Republic TV that at the time of sail, there were eight people on board-- three crew members and five passengers. Read Full Story.

After a suspicious boat carrying AK-47 rifles and ammunition was found off a beach in Harihareshwar, in Maharashtra's Raigad district, Deputy Chief Minister Devendra Fadnavis, who holds the Home Portfolio, on August 18 briefed the state Assembly over the incident and informed that the Central government has been alerted about it. He also assured that all angles will be investigated. Read FULL STORY.

The yacht in which three AK-47 rifles and ammo were found had sailed from Dubai in June and was carrying eight passengers, sources said. It raised a distress call on June 26 and a day later a Korean vessel rescued the crew.

The Yacht was being towed but broke midway and went adrift.

Amid a high alert issued in Maharashtra's Raigad district over the spotting of an unidentified boat, the Union Ministry of Home Affairs has said it is monitoring the situation closely.

As per sources, officials of the Home Ministry have taken stock of the situation and are in communication with authorities in Maharashtra.

Neptune Maritime Security has released an official statement after a box carrying the company's logo was found in a suspicious boat in Raigad. The box in the boat was carrying three AK-47 rifles and ammo.

"In June 2022, Neptune P2P Group provided private security on the vessel ‘MY Lady Han’. The yacht was damaged during a monsoon in the Arabian Sea, causing the Captain to declare an emergency. While the crew were rescued, the yacht was unable to be salvaged due to the extreme weather conditions.

Earlier this morning, Neptune P2P Group were made aware that the vessel, which was presumed sunk, had washed up on Indian shores.

Two suspicious boats have been found off the Maharashtra coast. The first boat, carrying AK-47 rifles and ammo, was on the beach of Harihareshwar.

Another boat was discovered near Bharan Khol Kinara, in which a life jacket and some documents were found.

#LIVE: First pictures accessed of second boat that washed up in Maharashtra, at the Bharan Khol Kinara. Tune in here - https://t.co/HibEqEVPCM pic.twitter.com/1BlAeWgxsQ

After a suspicious boat carrying weapons was found off a beach in Harihareshwar in Maharashtra's Raigad district, former Uttar Pradesh DGP Dr Vikram Singh on Thursday called it 'unusual and sinister', appealing to all the investigative agencies to get to the bottom of the conspiracy.

Speaking exclusively to Republic Media Network, former Uttar Pradesh DGP said, "It is a very serious matter. A boat registered in UK carrying AK series guns and ammunition is absolutely abnormal, unusual and sinister, and therefore, to a bid of reverse engineering with the degree of the boat with weapons and ammunitions, and I feel it is a very sinister plot against us. The investigative agencies have their hands full and need to get to the bottom of the whole conspiracy."

AN National Investigation Agency (NIA) team is en route to Raigad where 2 boats were found, one laden with AK-47 rifles and ammo.

Maharashtra Deputy Chief Minister Devendra Fadnavis said that the Anti-Terrorist squad is working on the case. He said that the terror angle has not been ruled out and an investigation is underway.

"ATS is also working on it. The additional force will also be deployed if necessary. All the precautions needed to be taken as per the norms of abandoned caution situation have been taken," he said.

Maharashtra Deputy CM Devendra Fadnavis on Thursday briefed the Assembly amid an AK-47-laden boat being found on a Raigad beach. He informed the Assembly that the boat belonged to an Australian woman. It was going from Muscat to Europe.

"The boat belongs to an Australian citizen. The boat's engine broke out in the sea, people were rescued by a Korean boat. It has now reached Harihareshwar beach. Keeping in mind the coming festive season, police and administration have been instructed to be prepared," Fadnavis said.

According to sources, two suspicious boats have been found. The first boat, carrying AK-47 rifles and ammo, was on the beach of Harihareshwar. Another boat was discovered near Bharan Khol Kinara.

Maharashtra Deputy CM Devendra Fadnavis who holds the Home Portfolio speaks in the Assembly amid an AK-47-laden boat being found on a Raigad beach. He informed the Assembly that the Central government has been alerted about the incident. He also assured that all angles will be probed.

Speaking to Republic TV, Maharashtra ATS Chief Vineet Agarwal said that he is en route to Raigad after a suspicious boat with AK-47 rifles and ammo was wound at Harihareshwar beach. He said that the Anti-Terrorist Squad will probe the terror angle.

Speaking to the media, Shrivardhan (Raigad) MLA  Aditi Tatkare said, "As per primary information, some boats containing weapons and documents are found in Harihareshwar and Bharadkhol of Shrivardhan in Raigad. Local Police are probing, I have demanded Chief Minister and Deputy Chief Minister to urgently appoint special team of ATS or State Agency."

According to sources, police have contacted 'Neptune Maritime Security' whose sticker was on the boat. The company has informed them about the incident of a yacht belonging to them which capsized a few days ago in international waters.

The company is into Maritime security. Weapons belonged to them as part of security. The weapons were in the yacht when it capsized. Maharashtra police, crime branch and ATS are verifying this claim

Raigad Collector has asked people to immediately inform the police and district administration if any suspicious activity is being found in the nearby area or if they suspect anybody. The collector has also urged citizens not to believe in any rumours.

Former Maharashtra ADGP PK Jain called it a very serious incident and the investigation in the case has to be very thorough to find out what is the genesis of the boat.

Speaking to Republic, Jain said, "This is a very serious incident. There is a number of Ak-47 rifles. I'm sure that the Government of India and ATS Maharashtra will be already on job to find what is the genesis of the boat. I have learned that the boat is registered in the UK and travelled all the way to Indian waters. That means It had to be a selective plan. The investigation has to be very very thorough."

Additional Director-General of Police and ATS chief Vineet Agrawal is reaching the spot. The Anti-Terrorist Squad said that it will probe the terror angle after a foreign-origin boat was found carrying AK-47 rifles and ammo.

As per sources, the boat is UK-registered, was distressed near Oman and was rescued from there. Meanwhile, the police has cleared the entire area in Raigad.

A suspicious boat with weapons was found off Raigad coast in Maharashtra on Thursday, propelling officials to sound high alert.

According to police and a photo that has been accessed, three AK-47 rifles were found along with cases of ammo in a custom-made box on the boat. Police are present on the spot and a probe is underway. A high alert has been issued.

Three AK-47 rifles were found along with cases of ammo in a custom-made box on the boat. Police are present on the spot and a probe is underway. A high alert has been issued.