Appealing for the higher security for the women protesting in Shaheen Bagh, advocate Mehmood Pracha, has mentioned ongoing violence in North-East Delhi

Appealing for the higher security for the women protesting in Shaheen Bagh, advocate Mehmood Pracha representing Bhim Army chief Chandrashekhar  Azad in the Shaheen Bagh issue, has filed an affidavit on Tuesday in the Supreme Court mentioning the ongoing violence in North-East Delhi. Slamming BJP leader Kapil Mishra's incendiary remarks ahead of the Maujpur stone-pelting on Sunday, the affidavit also claims that anti-social elements from UP entered Delhi and vandalised public property. The two-judge SC bench comprising of Justices SK Kaul and KM Joseph will take up the matter on Wednesday.

The affidavit mentions that while the Shaheen Bagh matter was listed in the SC on Monday, BJP's Kapil Mishra had carried out a pro-CAA rally in Maujpur - 2 km away from Jaffrabad. Slamming Delhi police's inaction, the affidavit states that violence escalated on Sunday with reports of anti-social elements from Uttar Pradesh entering Delhi and damaging public property. The affidavit has asked the SC to direct the police to register the FIRs against the perpetrators and provide additional security to the women at Shaheen Bagh protests. 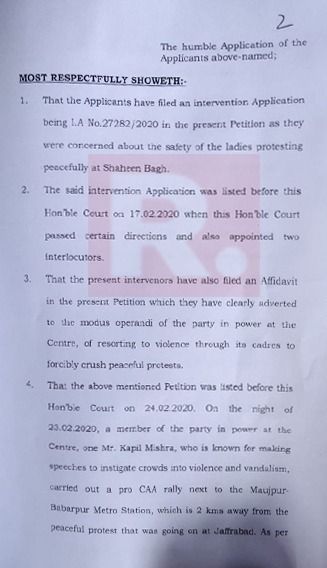 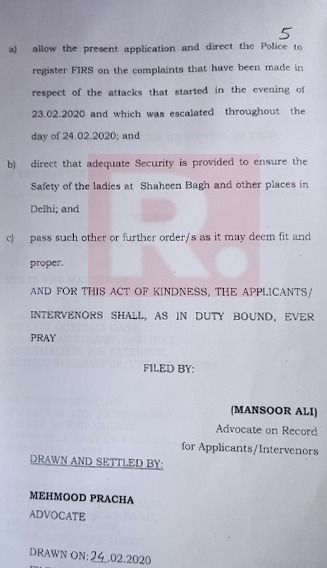 A day after stone-pelting was witnessed in Delhi's Maujpur area, protesters on Monday torched at least two houses and a fire tender in the Jaffrabad and Maujpur areas. Stone-pelting was witnessed for the second consecutive day between pro and anti-CAA groups, which has resulted in 7 fatalities including a police constable and injured 105, as of Tuesday. Union Home Minister will hold a meeting with Lieutenant Governor Anil Baijal, Delhi CM Arvind Kejriwal and representatives of various political parties pertaining to the law and order situation at 12 PM on Tuesday.

With the death toll in the Delhi violence rising to 7, Mumbai too has been put under high-security alert and the internet has been snapped in parts of North-East Delhi - Seelampur, Jaffrabad, and Maujpur.  Subsequently, Section 144 of the Code of Criminal Procedure has been imposed at 10 locations in the North-East district of Delhi. Stone-pelting has also been witnessed in Maujpur on Tuesday.

Earlier on Monday, after five days of mediation between SC-appointed interlocutors and the Shaheen Bagh protestors, the two interlocutors advocates Sadhana Ramachandran and Sanjay Hegde with the assistance of former Chief Information Officer Wajahat Habibullah have submitted two amicus reports to the two-judge bench. The judges have said that they will read the report and have fixed the next hearing on Wednesday. This development came after Habibullah termed the protests 'peaceful' and mentioned that the police (UP and Delhi) have blocked five points around Shaheen Bagh. The Shaheen Bagh protests mainly led by Muslim women have been ongoing against CAA-NRC-NPR since December 15.