Following Scindia's resignation, 19 Madhya Pradesh Congress MLAs who are in Bengaluru have written a letter to the Karnataka DGP asking for police protection.

Senior Congress leader Jyotiraditya Scindia along with 20 MLAs on Tuesday resigned from the Party. The development came after the discontented leader and former MP from Guna in Madhya Pradesh met Prime Minister Narendra Modi and Home Minister Amit Shah in Delhi. Following that, the 19 Madhya Pradesh Congress MLAs who are in Bengaluru have written a letter to the Karnataka DGP asking for police protection.

ANI quoted the MLAs' letter as saying, "We've come to Karnataka voluntarily for some important work, regarding which we require protection for our safe movement and stay in and around Bangaluru". 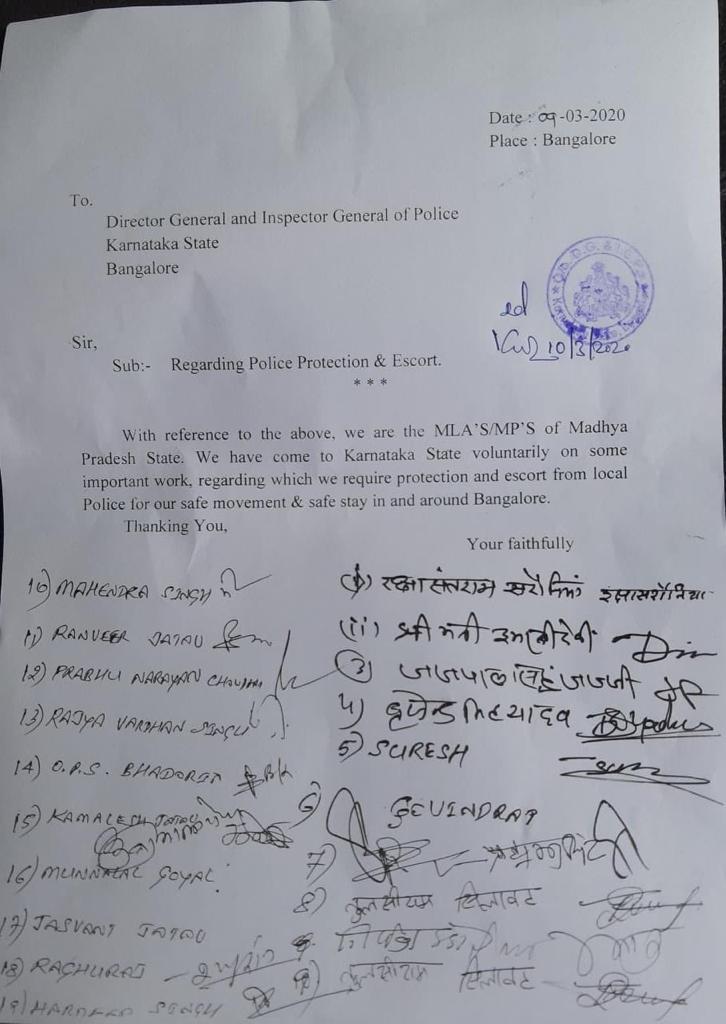 Rajasthan Chief Minister Ashok Gehlot on Tuesday accused Jyotiraditya Scindia of betraying the trust of people and ideology, saying that people like him cannot thrive without power and that the sooner they leave the better it is. Hitting out at Scindia soon after he resigned from the Congress, Gehlot said joining hands with the BJP at the time of national crisis spoke volumes about his self-indulgent political ambitions.

'Sooner they leave the better'

Joining hands with BJP in a time of national crisis speaks volumes about a leaders self-indulgent political ambitions. Especially when the BJP ruining the economy, democratic institutions, social fabric and as well the Judiciary.
1/2

Mr Scindia has betrayed the trust of the people as well as the ideology. Such people proves they can’t thrive without power. Sooner they leave the better.
2/2

Gehlot landed in Delhi on Monday night to make last-minute efforts to save the Madhya Pradesh government of the Congress.

'I don't think our government in MP will survive'

Adhir Ranjan Chaudhary, Congress leader in Lok Sabha said, "Scindia Ji held many senior posts in Congress party and was well respected, maybe he got lured by the offer of ministership given by Modi Ji. We know his family has been associated with BJP for decades, but yet it is a big loss. So yes it will indeed be a loss to our party and I don't think our Government in Madhya Pradesh will survive. This is the present-day politics of BJP, always tries to topple and destabilize opposition governments."

Meanwhile, former CM Shivaraj Singh Chauhan, who may return to power if the Kamal Nath government falls in Madhya Pradesh, on Tuesday refused to comment on the situation. “This is Congress’ internal matter and I would not like to comment on it. We had said on the first day that we are not interested in bringing down the government,” Chauhan was quoted as saying by news agency ANI.