The Maharashtra Government administration had announced an allowance of Rs 300 per worker per day, during the COVID pandemic and its aftermath, according to AAP

The Aam Aadmi Party has lashed out at Shiv Sena led MVA Govt in Maharashtra accusing the BMC of non-payment of COVID-19 allowance dues to BEST workers for the last six months. The Maharashtra Government administration had announced an allowance of Rs 300 per worker per day, during the COVID-19 pandemic and its aftermath, according to AAP's Mumbai Unit.

While stating that the AAP has not received a response for their letter dated December 19 regarding the issue, Preeti Sharma Menon, AAP Prabhari for Mumbai, has written again to Mayor Kishori Pednekar on Tuesday demanding the disbursement of the pending dues to the BEST workers at the earliest, failing which the AAP will be forced to escalate the matter.

The letter to Mumbai Mayor 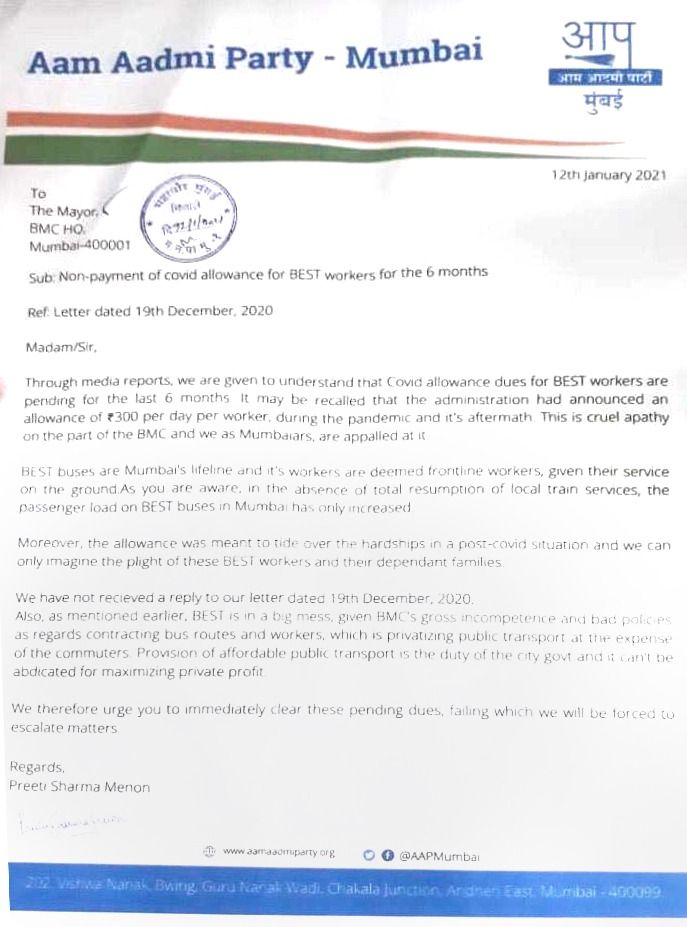 "This is cruel apathy on the part of the BMC and we as Mumbaikars, are appalled at it. BEST buses are Mumbai's lifeline and its workers are deemed frontline workers, given their service on the ground. As you are aware, in the absence of total resumption of local train services, the passenger load on BEST buses in Mumbai has only increased," Preeti Sharma Menon, AAP Prabhari for Mumbai, said in a statement.

"Moreover, the allowance was meant to tide over the hardships in a post-covid situation and we can only imagine the plight of these BEST workers and their dependant families," the statement added.

"We, therefore, urge you to immediately clear these pending dues, failing which we will be forced to escalate matters," said Preeti Sharma Menon, AAP Prabhari for Mumbai.

"BEST is in a big mess, given BMC's gross incompetence and bad policies as regards contracting bus routes and workers, which is privatizing public transport at the expense of the commuters. Provision of affordable public transport is the duty of the city govt and it can't be abdicated for maximizing private profit," the letter read.

WE RECOMMEND
Hike vs Signal app rankings: Here are the reasons as to why users choose Signal over Hike
What is the Rumble app? How to download the app on iOS and Android?
What is CloutHub app? How to download CloutHub on your iOS and Android device?
Does Signal have a web app like WhatsApp web? Here's a full tutorial
Indian Chatting apps: Know the best Indian WhatsApp Alternatives