After 10 Congress leaders were removed in Uttar Pradesh & Jyotiraditya Scindia changed his Twitter bio, an uprising against Priyanka Gandhi Vadra is evident

After Priyanka Gandhi purged 10 Congress leaders in Uttar Pradesh and former state General Secretary Jyotiraditya Scindia from Madhya Pradesh changed his Twitter bio removing all mentions of the party, it seems that there has been an uprising against Congress and Priyanka Gandhi Vadra in the party. This comes as the party laid off 10 veterans for openly defying party national general secretary Priyanka Gandhi Vadra. According to media reports, she has been attempting a revamp of the state machinery after three consecutive poll humblings in India's most electorally significant state - two in Lok Sabha elections, once in Assembly polls.

The expulsion order was passed by the UP Congress disciplinary committee comprising Shyam Kishor Shukla, Imran Masood, and Ajay Rai. The members who were expelled from the party for six years were also given a show-cause notice. As per sources, this is the party's preparation ahead of the upcoming Assembly elections in 2022, Uttar Pradesh. This adds to the disenchantment that has been evident within the party ranks, stated or unstated.

Former UP ministers Ramkrishna Dwivedi and Satyadev Tripathi, Siraj Mehdi (former MLC), Santosh Singh (former MP), Bhoodhar Narayan Mishra (former MLA), Vinod Chaudhary (former MLA), Nek Chandra Pandey (former MLA), Swayam Prakash Goswami (former chairman of the Youth Congress) and senior leader Sanjeev Singh were expelled. These leaders are accused of opposing the decisions of the party leadership at public forums and tarnishing the image of the party, according to the statement. "A notice was issued to 11 leaders on Thursday and a reply was sought in the next 24 hours. Barring former MLA Hafiz Mohammad Umar, no one submitted their reply," Masood said. The Congress on Thursday served the notices to the leaders in the state for "unnecessarily opposing" the party over the revamp of the Uttar Pradesh Congress Committee (UPCC) in October.

Scindia is believed to have been on the 'young guard' faction of the Congress party, along with Sachin Pilot and Jitin Prasada. When it had come to pick a successor after Rahul Gandhi as the President of the party his name appeared to be amongst the top. However, the eventual chief wasn't from among them, as Sonia Gandhi was re-appointed as interim party chief instead. Since the elections, Scindia, along with others such as Milind Deora, has strayed from the party line on numerous occasions, on events such as the Abrogation of Article 370 of the Constitution, and the Howdy Modi event. However, after changing his bio he clarified his stance and offered that "A month back I had changed my bio on Twitter. On people's advice, I had made my bio shorter. Rumours regarding this are baseless". 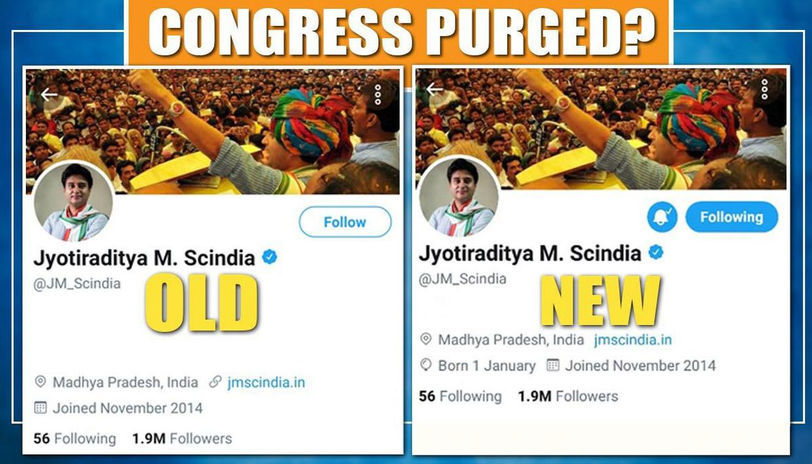