London-return Pushpam Priya Choudhary, the daughter of JDU leader Vinod Choudhary, on March 8 declared herself as the Chief Ministerial candidate. Since then, she has been touring various parts of the state and launched her party called Plurals. She says that her aim is to 'Open Bihar' to development and end '30 years of lockdown.' Despite her extensive tours, she has failed to get the limelight even as campaign season heats up for the Bihar elections. 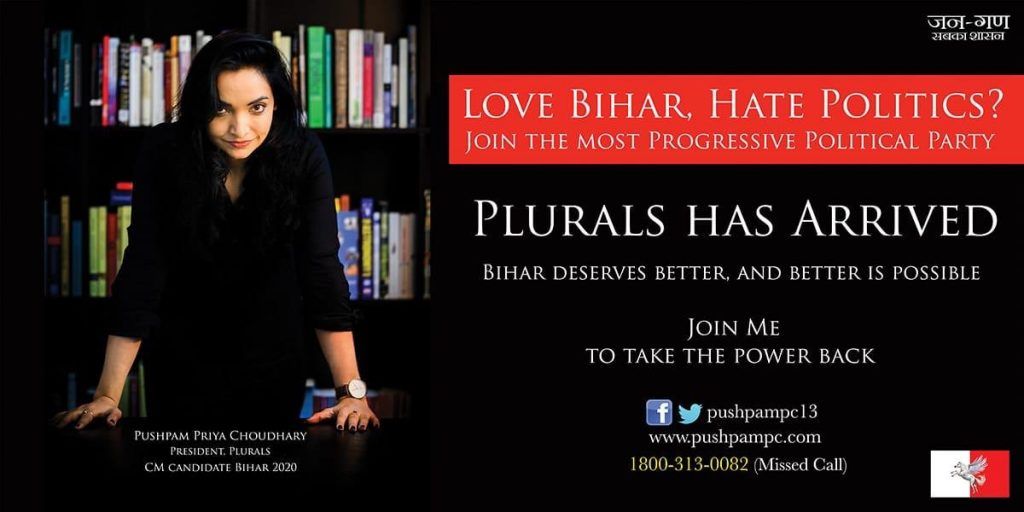 After Pushpam Priya Choudhary declared herself as Chief Ministerial candidate, her father Vinod Chaudhary clarified that the JD(U) is not supporting her decision and stated that he will not switch sides either.  "It is her decision to declare herself as the "Chief Ministerial candidate" and she is educated enough to decide for herself," Vinod Chaudhary had said. "Why will the party support me. They have no right to support. My daughter is challenging the top leaders of the party."

Other alliances in Bihar polls

This year's Bihar elections will witness the clash of as many as five alliances. The ruling JDU-BJP is contesting along with Mukesh Sahni's VIP and former CM Jitan Ram Manjhi's Hindustani Awam Morcha (Secular), while LJP has decided to go solo. The Mahagathbandhan led by RJD has lost many key allies and is contesting with Congress and three left parties, with Lalu Yadav's son Tejashwi as CM face.

On 28 September, Pappu Yadav who is eyeing a comeback in politics of Bihar stitched an alliance of his party Jan Adhikar Party (JAP) with Chandrashekhar Azad's Azad Samaj Party', MK Faizi's Social Democratic Party and Bahujan Mukti Party. They named it the Progressive Democratic Alliance (PDA). On the other side, confident after his party's victory in byelections, AIMIM chief Asaduddin Owaisi has teamed up with Upendra Kushwaha-led RLSP, Mayawati's BSP, Devendra Yadav's SJDD, and SBSP as the 'Grand Democratic Secular Front' to contest the upcoming polls.

Bihar goes to polls in three phases for its 243 assembly seats on October 28, November 3 and November 7. Keeping in view the COVID-19 protocol, the voting time has been increased by one hour. The counting of votes will take place on November 10. In the 2015 state polls, the Mahagatbandhan comprising RJD, JD(U) and Congress won a whopping majority with 178 seats under the leadership of Nitish Kumar. On the other hand, the BJP-led alliance won from only 58 constituencies. On July 26, 2017, Nitish Kumar stepped down as the CM citing irreconcilable differences with RJD over corruption allegations against Tejashwi Yadav and joined hands with its former ally BJP.