It is finally clear that RJD chief Lalu Prasad Yadav's elder son Tej Pratap Yadav will be contesting the upcoming Bihar assembly elections from Hasanpur constituency as he filed nomination papers on Tuesday. His younger brother and CM-face of RJD Tejashwi Yadav was also present as the former health minister of the state filed his nomination papers in Hasanpur amid the crowd cheering for him.

Tej Pratap has abandoned the Mahua constituency in Vaishali district from where he was elected in 2015, and if rumors are to be believed, the reason for shifting to Hasanpur is that his estranged wife Aishwarya Rai may contest from his Mahua seat. His father-in-law Chandrika Rai joined the JDU days before the elections and is contesting from Parsa constituency. Meanwhile, Tejashwi Yadav is seeking re-election from Raghopur and is scheduled to file his nomination papers on Wednesday. Tej Pratap will face sitting JDU MLA Raj Kumar Ray in Hasanpur while Tejashwi is pitted against BJP's Satish Kumar, who had trounced his mother Rabri Devi from the seat in the Sonepur district in 2010.

Both Hasanpur and Raghopur will go to polls in the second phase of assembly elections - November 3. Earlier on Monday, Tej Pratap received the party symbol for Hasanpur seat from his mother and former CM Rabri Devi, in the presence of younger brother Tejashwi, pictures of which were posted on Facebook. The post also had a photo of Lalu, with 'Miss you papa' written on it. 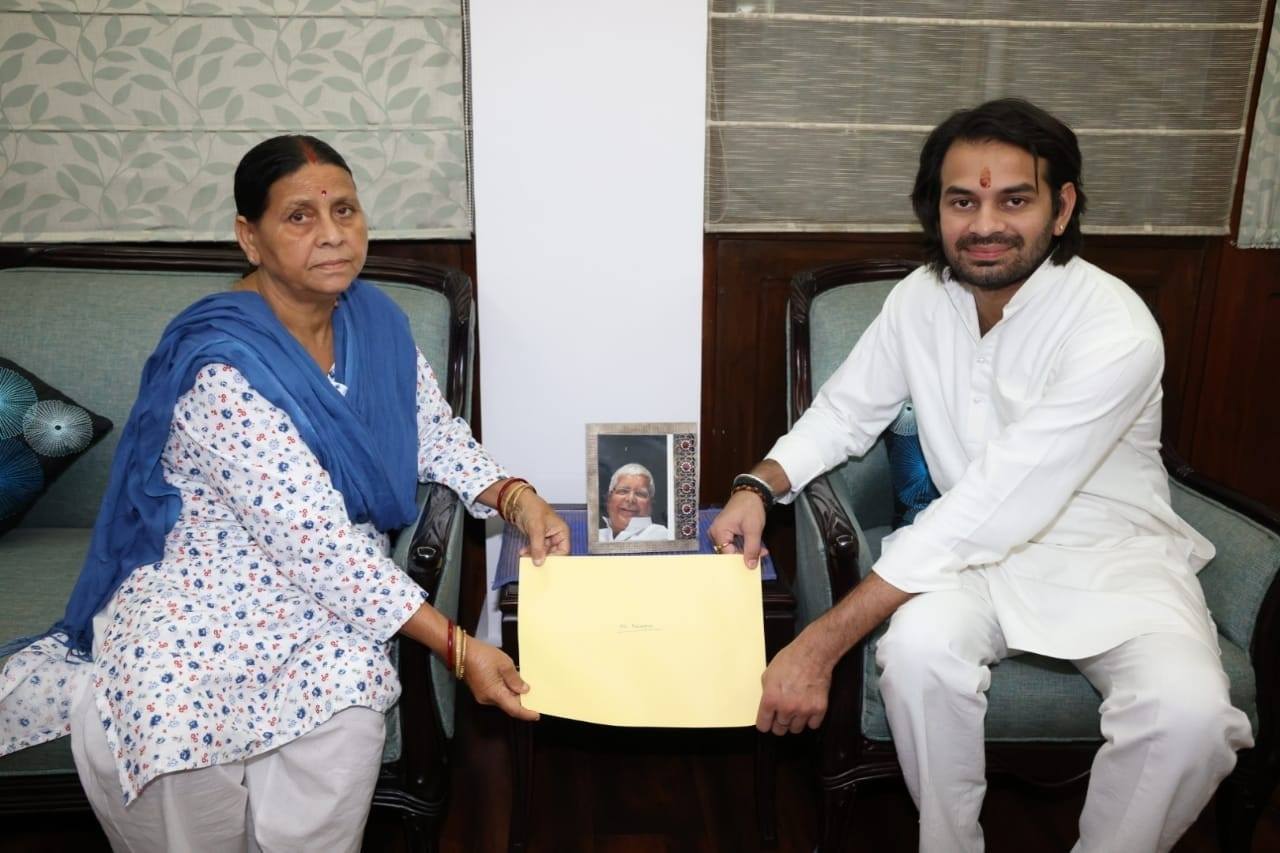 RJD will contest 144 seats in Bihar as the party agreed to a seat-sharing deal of 144-70 with the Congress. Three other Communist parties are also part of Mahagathbandhan and are contesting on 29 seats. Tejashwi Yadav has been declared its CM face. Bihar will vote in 3 phases - October 28, November 3, and November 7, with the results being declared on November 10.

This year's Bihar elections will witness the clash of as many as five alliances. The ruling JDU-BJP is contesting along with Mukesh Sahni's VIP and former CM Jitan Ram Manjhi's Hindustani Awam Morcha (Secular), while LJP has decided to go solo. The Mahagathbandhan led by RJD has lost many key allies and is contesting with Congress and three left parties, with Lalu Yadav's son Tejashwi as CM face.

On 28 September, Pappu Yadav who is eyeing a comeback in politics of Bihar stitched an alliance of his party Jan Adhikar Party (JAP) with Chandrashekhar Azad's Azad Samaj Party', MK Faizi's Social Democratic Party and Bahujan Mukti Party. They named it the Progressive Democratic Alliance (PDA). On the other side, confident after his party's victory in byelections, AIMIM chief Asaduddin Owaisi has teamed up with Upendra Kushwaha-led RLSP, Mayawati's BSP, Devendra Yadav's SJDD, and SBSP as the 'Grand Democratic Secular Front' to contest the upcoming polls.