A BJP neta has shared images of an incident wherein a Pakistan flag was allegedly unfurled by a Congress leader during a protest in Germany against farm laws.

At a time when Congress is facing flak for supporting external forces on India's internal matters, a BJP leader has shared images of an incident wherein a Pakistan flag was allegedly unfurled during a protest in Germany against the agriculture reform laws.  BJP's Mumbai Spokesperson Suresh Nakhua on Monday sharing images on his Twitter handle alleged that "Rahul Gandhi's Congress is hand in glove with Pakistan."

'Congress is hand in glove with Pakistan'

In another tweet, he alleged that "Rahul Gandhi's Indian Overseas Congress which is unfurling Pakistan's flag, donated 1 crore for the farmers."

Rahul Gandhi's Congress is Hand in glove with pakistan.

One in red is Raj Sharma, office bearer of IOC Germany#CongresswithPak pic.twitter.com/YmnqmaPT3p

The Indian Overseas Congress has clarified on the BJP's claims, stating that the persons holding the Pakistan flag aren't affiliated with the party. It hasn't, however, confirmed the same with regards to the second person Nakhua highlights - the purported Charan Kumar. 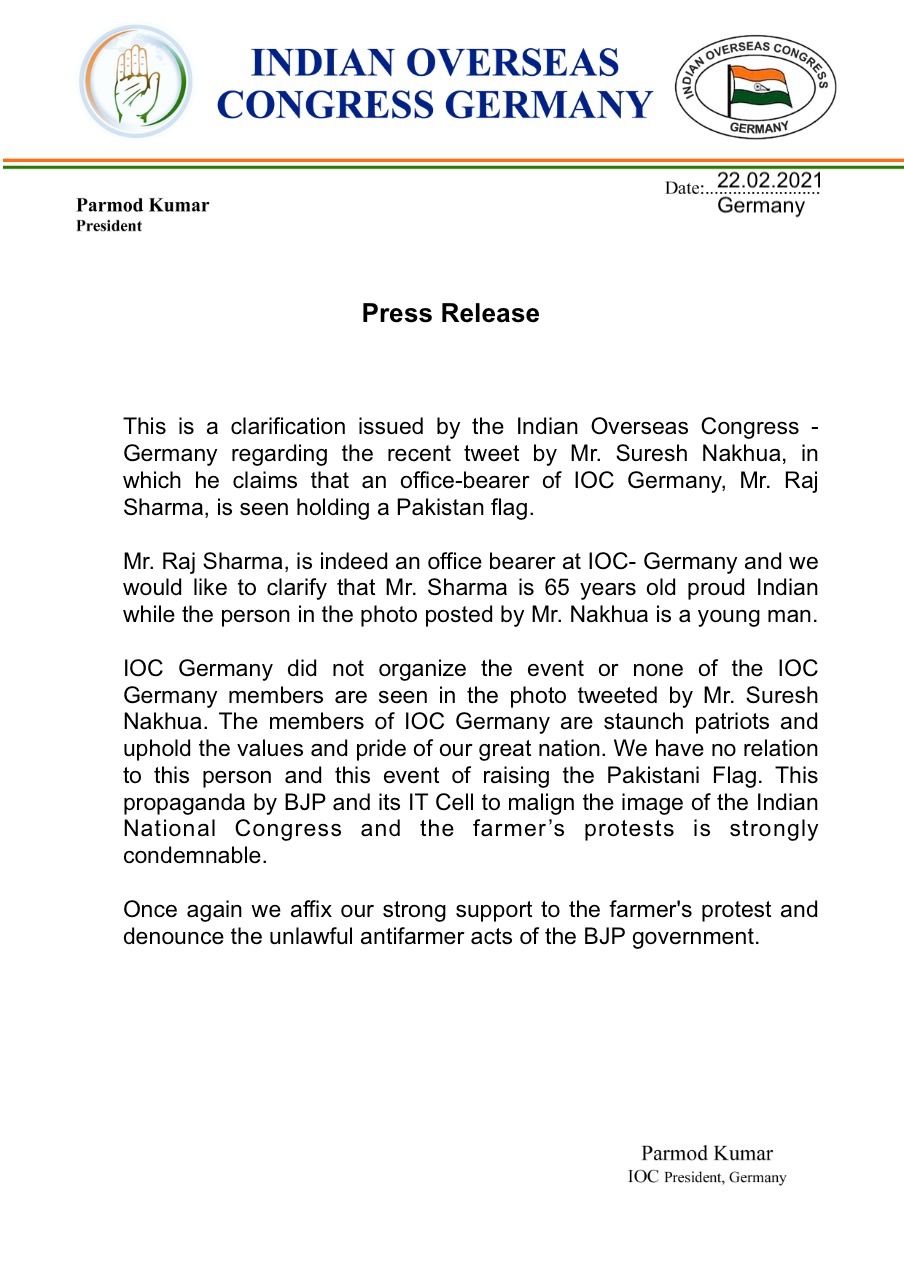 Meanwhile, after taking out a tractor rally in his constituency in solidarity with the agitating farmers, Rahul Gandhi on Monday said agriculture is the only business that belongs to "Bharat Mata" and called upon the people to "force" the government to take back three farm laws brought the BJP-led central government.

"The entire world can see the difficulties faced by Indian farmers. But the government in Delhi is unable to understand the pain of the farmers," Gandhi said addressing a meeting organised after the six-kilometre tractor rally between Thrikkaipatta to Muttil in Wayanad. "We have pop stars who are commenting on the situation of Indian farmers but the Indian government is not interested. They are not going to take back three laws unless they are forced," the Wayanad MP said.

Earlier the Indian government had directed Twitter to remove 1178 Pakistani-Khalistani accounts spreading misinformation and provocative content around farmers' protest. Twitter blocked over 97% of the accounts and posts flagged by the IT Ministry for provocative content and misinformation around farmers' protest, news agency PTI quoting its sources said.

The Ministry had questioned Twitter's delay in taking action on its order to block provocative content that could impact public law and order, whereas the American company had been quick to crack down when a similar instance occurred at US Capitol Hill. According to the sources, Twitter complied with the orders and over 97% of the accounts flagged have been blocked.

Thousands of farmers protesting the Centre's new agri laws had clashed with the police during their tractor parade on January 26. Over 500 police security personnel were injured while one protestor died during the Republic Day violence.