As the tussle between TMC and BJP intensifies ahead of Bengal elections, the saffron party has now slammed Mamata Banerjee-led party for "insulting the forces" 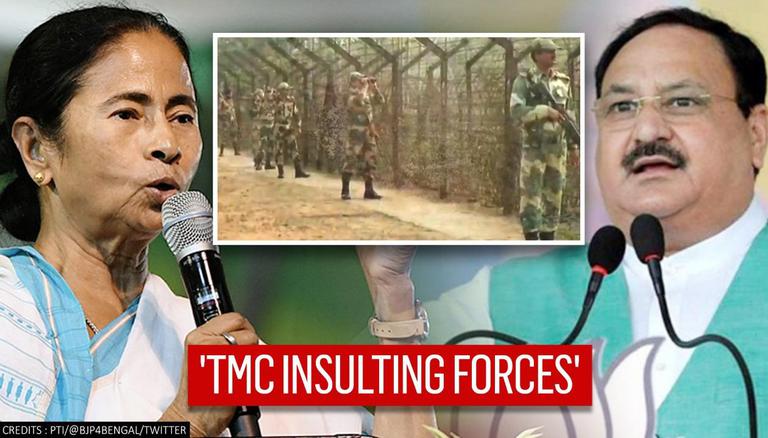 As the tussle between Trinamool and BJP intensifies ahead of West Bengal Assembly elections, the saffron party has now slammed Mamata Banerjee-led party for "insulting the forces." In a video, BJP has said that people of Bengal will not forgive those who insult the Forces. BJP said that the BSF soldiers are away from their homes and are serving the nation, but due to political reasons, Trinamool is levelling false allegations against those who are ready to give their life for the nation.

The reaction from BJP comes after TMC leader Firhad Hakim on Thursday alleged that the Border Security Force (BSF) is working at the behest of BJP. He had alleged that the BSF soldiers are pressurising border villages in West Bengal to vote for the saffron party. The Border Security Force, in its response, slammed the TMC leader and asserted that it is not aligned with any political party or a group.

Hakim added, "BJP is provoking hatred in West Bengal by communal speeches, we requested EC to take note of it. We all want peaceful & fair elections. This 'goli maro' etc is provocation to divide the society. They are terrorising people to vote for them".

BJP is sending BSF to villages in border areas in West Bengal and terrorising people to vote for them, this is my allegation. Election Commission said we will cross-check it: TMC leader Firhad Hakim after meeting EC officials, Kolkata pic.twitter.com/FiGgUY2Qkk

The ruling party of West Bengal, intimated the Election Commission about the same. TMC secretary-general Partha Chatterjee told reporters after meeting the ECI delegation in Kolkata, "We have informed the CEC and other ECI officials that the BSF is threatening voters in the border areas. We have received inputs that officers of the paramilitary force are visiting various villages and asking people to cast their votes in favour of a particular political party. This is a dangerous situation and the ECI must look into it." The full bench of the ECI, led by Chief Election Commissioner Sunil Arora, arrived in the state on Wednesday evening on a three-day visit ahead of the assembly polls.

The BJP has claimed it'll win 200 seats, while the Trinamool, via Prashant Kishor has contended that the saffron party won't cross 99. West Bengal assembly with 294 seats will go to polls in April-May 2021, Trinamool holds 222 seats. BJP has made major inroads in the state in the Lok Sabha elections winning 18 seats and establishing itself as the major opposition force in the state. Mamata Banerjee has announced that she will contest polls from Nandigram, the place that paved way for her rule in the state, and her ex-aide Suvendu Adhikari - who is now in BJP - has vowed to defeat her.