Stalin said that the party condemned the Edappadi government's police crackdown on the night of February 14. He said that it was a deliberate attack on people

Dravida Munnetra Kazhagam (DMK) President MK Stalin said that the action taken against the protesters by the Tamil Nadu government is incorrect and called on the police to release the protestors. MP Kanimozhi also slammed the police for mishandling the situation.

DMK calls for a probe

Stalin said that the party condemned the Edappadi government's police crackdown on the night of February 14. He claimed that it was a deliberate attack on people who fought peacefully against the Citizenship Amendment Act (CAA) and urged the authorities to release the detainees and have their cases be withdrawn.

Earlier, Thoothukkudi MP Kanimozhi said that the police had mishandled the situation and called for a probe on the clashes. In a Facebook post on Saturday afternoon, she said, "The JC North Kapilkumar Saratkar IPS mishandled the situation which led to violence. Mr.Kapilkumar was the DIG when Thoothukudi firing took place." She added that he should have been posted in a less sensitive region, but was rewarded with a JC post. She said that Saratkar was squarely responsible for yesterday’s violence in Washermenpet" and should be immediately suspended.

The police detained over 100 protesters after a scuffle with them during a demonstration against the Citizenship Amendment Act (CAA) and National Register of Citizens (NRC) at Washermanpet in Chennai on the evening of February 14. The protesters were raising slogans against CAA and NRC during the protests. 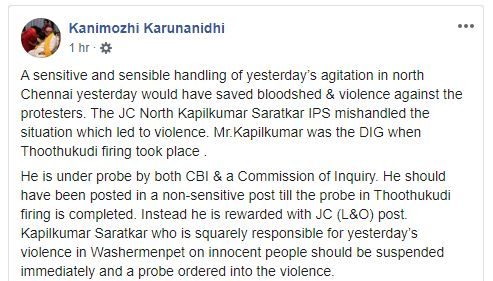 The incident on Friday led to sporadic protests across Tamil Nadu, including at Washermanpet in the city, where the violence erupted, but protesters subsequently called off the agitation, following talks with City Police Commissioner AK Viswanathan. Four police personnel, a woman joint commissioner, two women constables and a sub-inspector were injured in the stone-pelting, the police said, even as reports emerged that some protesters were also hurt. Joint Commissioner P Vijayakumari sustained injuries on her head, the police said, adding that those wounded were admitted to a hospital.