The Election Commission of India (ECI) has announced Biennial elections to the council of states to fill what will be 55 vacant Rajya Sabha seats from 17 states, with the current MPs retiring in April 2020. Elections will be held on 26 March from 9 AM to 4 PM and counting of votes will take place from 5 PM onwards.

Out of the seven seats of Maharashtra, two are held by NCP leaders Sharad Pawar, and Majid Memon, while one by Shiv Sena and Congress each. Rajkumar Dhoot of Shiv Sena and Husain Dalwai of Congress. All of these are a part of the Maha Vikas Aghadi coalition government in Maharashtra. One seat each is held by Ramdas Athawale of the Republican Party of India and Amar Shankar Sable of BJP. Both BJP and Republican Party of India are alliance partners. One seat is held by Independent candidate Sanjay Kakade.

Bihar at present is completely occupied by allies JDU (3 seats) and BJP (2). It will be interesting to see if the Congress or the RJD will be able to carve a place for themselves following an intense poster war in the state between all the parties.

Another important state to observe will be West Bengal which is currently dominated by Mamata Banerjee led TMC having four seats and one seat with Independent. It will be interesting to see if BJP is able to have its members in Rajya Sabha after its claim of the growing foothold in the state.

The term of office of 55 members of the Rajya Sabha elected from 17 States is due to expire on their retirement in April 2020 as detailed below: 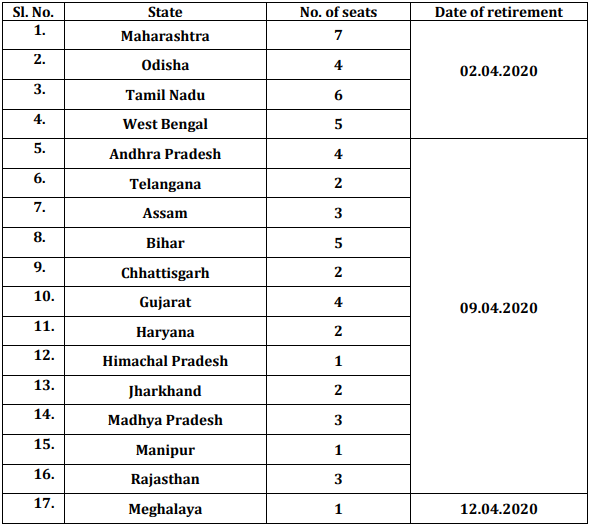