'Gujarat Can Never Rule Bengal': Mamata Asserts 'TMC Will Be Back With Huge Mandate'

Hitting out at BJP, West Bengal CM Mamata Banerjee said no matter how many campaigners visit the state ahead of polls, TMC will be back with a huge mandate. 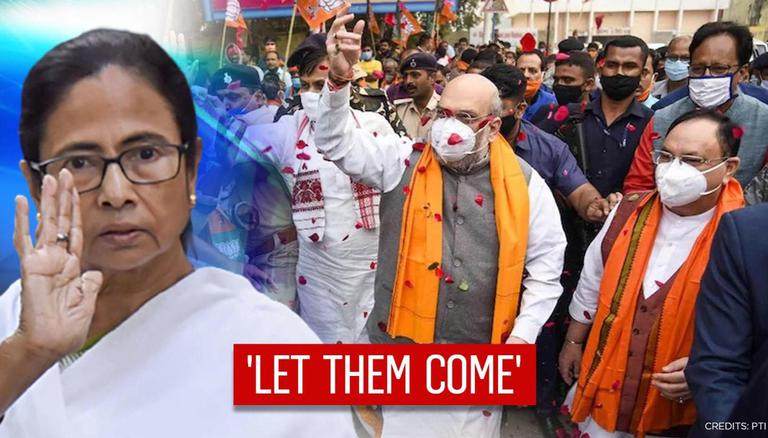 West Bengal Chief Minister and Trinamool Congress President Mamata Banerjee on Monday lashed out at her rival Bharatiya Janata Party (BJP) and said no matter how many campaigners visit the state ahead of polls, TMC will be back with a huge mandate.

Responding to criticism from saffron party members over the state budget, Banerjee said, "Some are speaking politically regarding the budget. Some are saying that it's an advertisement ahead of the polls. Is there any problem if it is an advertisement? Some say we only have a few days left in power, but we will back with a huge mandate."

Addressing the state assembly, Banerjee slammed Uttar Pradesh Chief Minister Yogi Adityanath, who is likely to participate in the election rally in Bengal. "Does he even know what Nanoor (village) is famous for?" she asked.

"Someone said Yogi (Adityanath) will visit the state. Whoever wants to come here can come. But Gujarat can never rule Bengal," said Mamata Banerjee.

Presenting her first budget on Friday, the Chief Minister announced a Rs 2.99 lakh crore budget for FY 2021-2022. In the absence of Finance Minister Amit Mitra, Banerjee was allowed to present the annual budget by Governor Jagdeep Dhankar in the Assembly.

With Left parties and Congress boycotting the Budget session, Banerjee's presentation was met with loud ruckus by the few BJP MLAs shouting 'Jai Shri Ram' in the Assembly - as Governor was not allowed to give his usual address to the Assembly. Bengal, where Banerjee holds the fort with 222 seats, is set to go to the polls in April-May 2021. This was the last interim-budget of the Assembly ahead of elections.

The Mamata Banerjee-led TMC recently witnessed the exit of heavyweight leader Suvendu Adhikari along with 6 MLAs, 1 MP, and 16 other grassroots leaders - who joined BJP and has now been fielded in the saffron party's political campaign. Later Adhikari's two brothers joined BJP, while his father has been removed from his post in the TMC.

While sports minister  Laxmi Ratan Shukla has 'retired' from politics, Rajib Banerjee also switched to BJP. Banerjee has hit out her rival, saying she will 'fight alone if needed'. The saffron party is gearing for a tough battle in Bengal - aiming to attain more than 200 seats, while not fielding a CM face yet.