BJP MP Gautam Gambhir hit back at AAP's Sanjay Singh after he called him "a hypocrite." Singh said Gambhir is against free services which benefit the poor.

AAP leader Sanjay Singh on Wednesday called BJP MP Gautam Gambhir "a hypocrite" and said that if he is against free services which benefit the poor, he should surrender those facilities. Minutes after the statement, Gautam Gambhir took to Twitter and clarified that he "never" said that poor should not get free services. Gambhir also stated that "only that people who can afford should be charged a nominal amount."

I have NEVER said that POOR should not get free services. Only that people who CAN afford should be charged a nominal amount!!

FYI - I have not taken a single govt benefit in 8 months unlike your hypocrite CM who had been advertising himself at the taxpayers’ expense for 5 yrs https://t.co/s0vHCICpOc

The BJP MP further attacked Delhi Chief Minister Arvind Kejriwal and accused him of "advertising himself" at the taxpayers’ expense for 5 years. Gambhir also clarified that he has not taken a single government benefit in 8 months of his tenure as the MP. Gambhir also called Kejriwal 'Jhootliwal!!' 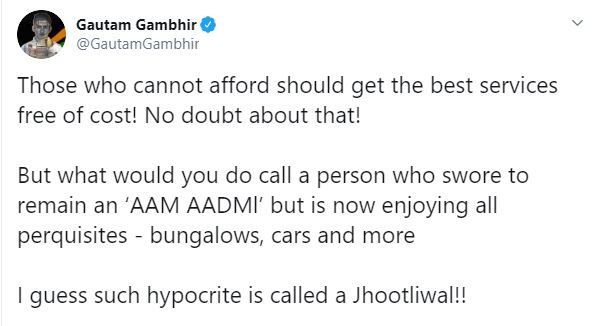 The war of words between AAP and BJP had begun long before the Election Commission of India announced the dates for the Delhi elections, with BJP constantly referring to Kejriwal's welfare schemes as freebies. Recently, Arvind Kejriwal tweeted a new report which quoted BJP's Manoj Tiwari saying the party will give five times more subsidy in power and water tariffs to the residents of Delhi if the government is elected to power. The Delhi Chief Minister questioned the claims and asked whether the party will provide 1000 units of free electricity and provide one lakh litres of free water.

CM Kejriwal went on to add that the party is trying to mock the citizens and questioned whether the party has been able to implement such policies in other states where it has formed the government. Manoj Tiwari, in his response, did not back down and went on to add that the BJP government in Delhi will definitely give substantial subsidies, as much as 5 times more than the current system in place. He questioned the Delhi government and asked what impact has it had on the people during its term and the number of families that have benefitted from the AAP government.

The Aam Aadmi Party has fielded 24 new faces, dropping 15 sitting MLAs, in its list of candidates for the February 8 Delhi assembly elections announced on Tuesday. The new candidates included Atishi Marlena, Dilip Pandey and Raghav Chadha, who unsuccessfully contested the 2019 Lok Sabha elections, and five others who recently defected from the Congress. In the 2015 assembly elections, the Aam Aadmi Party had stormed to power by winning 67 seats in the 70-member Delhi Assembly. The BJP had won three seats while Congress drew a blank in the last assembly elections.